Celtics Pregame: Stevens on loss to 76ers, 'I remember the losses vividly' 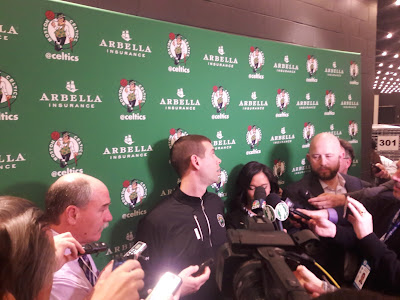 Celtics coach Brad Stevens didn't hide his disappointment in his team's loss against the 76ers on Sunday and isn't paying much attention to the Eastern Conference standings.

Although the Celtics head into Monday's contest against the Wizards clinging onto a 1.5 game lead ahead of Washington for second place, Stevens says he's solely focused on making sure his team plays the best basketball from here on out.


"I just think it's about playing good basketball, that stuff sorts itself out," Stevens explained. "Obviously, you want to be as good as a seed as you can, I think that there's no question about that [but] I'd like to have some healthy games here to play some good basketball and see if we can figure ourselves out as we head into next month-plus."

While reminiscing on Sunday's loss in Philadelphia, Stevens explained how his team played well in some instances and not so much in the second half. He also went on to say that as a basketball coach the games you lose are unforgettable but it's still important to send a message to your team before moving on to the next game.


"I remember the losses vividly, I go through them all," Stevens said. "Those are tough and you move on. You show your team what you need to show them and then you move on and try to get a little better from it. We played really well in the middle of that game but we played really careless in the middle of the third quarter, early parts of the fourth then when there's five minutes left it's anybody's game. Put yourself in a tough spot."

The Wizards enter TD Garden as one of the hottest teams in the league -- something that doesn't surprise the Celtics head coach heading into their fourth and final meeting of the regular season.


"They're really good. Washington is really good, think everybody knew that. At the start of the year they went through an adjustment period; new coaching staff, a lot of new players, etc. Man, they can play at a high level, certainly have done so against us and I think Scott and his staff have done a great job. This is a really good team and obviously adding Bogdanovic and his ability to shoot the ball and then Mahinmi -- even though he's was with them all year -- is like an All-Star break add, very talented and Jennings too.

Throughout their past three meetings, there's definitely no love lost between the Celtics and the Wizards. There's been an altercation in nearly all three meetings, including the last time Washington faced the Celtics in Boston where members of both teams needed to be held back by security in the hallway shortly after the game.

However, Stevens downplayed the notion of a Boston-Washington rivalry. Saying he's entering Monday's game the same way he enter every game -- focused on improving his squad.


"Again, my focus is on playing good basketball," Stevens explained. When I think of rivalries I think of years upon years upon years in the making. Certainly, we have a great deal of respect for how good these guys are and that's that. But we have to focus on trying to do our best to play as well as we can against them which means a lot of the focus has to be on what we're trying to accomplish.

"Maybe the players will say different but I don't feel any different."