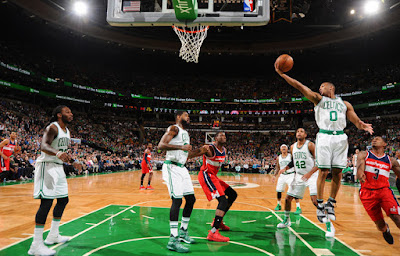 For a team that entered Monday night's game as the fifth-worst rebounding team in the league, the Celtics rarely ever out-rebound their opponent.

But when it came to facing the Wizards at home with playoff implications on the line, the C's looked like a team that just simply wanted it more.

The Celtics not only out-rebounded their opponent, 54-39, but we very physical with the Wizards on defense and made it tough for them to find their offensive rhythm while the C's cruised to a 110-102 victory. For the first time in two years, the Celtics pulled down 20 offensive rebounds. The last time the C's grabbed 20 or more offensive boards in a winning effort was against the Bulls in the 2009 playoffs.

With the win, the Celtics (45-26) now hold a 2.5 game advantage over the Wizards for the No. 2 seed in the Eastern Conference.

Sure, the return of Isaiah Thomas (25 points, 2 steals) certainly helped but it wasn't just the Celtics leading scorer who made a huge impact for the Celtics. Avery Bradley had such an incredible first quarter that Brad Stevens kept him in for it's entirely. He scored 11 points, grabbed four rebounds and dished out three assists in the first 12 minutes before finishing with 20 points, 9 rebounds and four assists.

Up front, Al Horford set the tone by creating stops while also making an effort in boxing guys out in the paint and guys like Amir Johnson and Kelly Olynyk followed suit. Led by Horford's 16 points, 9 rebounds, the three big men finished with a combined 23 rebounds and four rebounds while Jae Crowder 16 points and pulled down 9 boards.

Bradley Beal's 19 points led the Wizards, John Wall finished with 16 points 8 assists but did most of his damage from the free-throw line -- where he netted 8-of-9. Markieff Morris and Bojan Bogdanovic each scored 14 points and Jason Smith chipped in 13.

Washington's only significant lead came midway through the first quarter when they pulled ahead by seven. From there, the Celtics rallied back and held onto their lead for the final three quarters.

Emotions ran high before halftime when there was a dust up between Brandon Jennings and Terry Rozier happened at the 8:07 mark of the second quarter. After Jennings intentionally stopped short in front of Rozier twice while the two were heading up the floor before Rozier eventually ran into him, extended his arms to create space and Jennings hit the deck.

After review the play, officials handed both guys a technical foul, with Jennings receiving a personal foul as well.

However, that didn't slow down the Celtics, they outscored their opponent, 28-19, in the second quarter and took a, 58-47 lead into intermission. One of the Celtics' recent shortcoming against the 76ers that Brad Stevens alluded to before the game was their lack of consistency in the third quarter.

The C's kicked off the second half by going on a 16-7 run and eventually led by 20 points -- their biggest lead of the night. And unlike Sunday, they kept their composure and didn't allow the Wizards to pull no closer than 15 points.

Although Washington managed to get their deficit down to six points, the Celtics came up with huge defensive stops and flirted with a double-digit advantage throughout most of the final frame.

The Celtics will look to make it two in a row when they host the Pacers at TD Garden on Wednesday.

Boston forced 18 Wizards turnovers and turned their 20 offensive rebounds into 22 second-chance points. With the win, the Celtics are now an even 2 games behind the Cavaliers for the best record in the Eastern Conference.