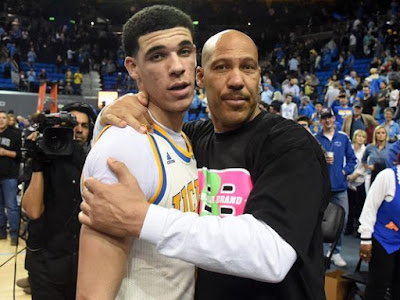 If you haven't heard by now; UCLA's Lonzo Ball is projected to be a top NBA-prospect in this year's Draft. His dad; LaVar Ball has made the sports world well aware of that fact over the last few months and that could potentially make an impact on his professional career.

As it currently stands, the Boston Celtics, who are tied for first place in the East, have the best chance of grabbing the No. 1 pick in this summer's draft lottery. Though LaVar Ball has made it known he would like his son to become a Laker, he would also like for Danny Ainge to pass on Lonzo if the C's do in fact end up owing the top pick.

After appearing on Boston Sports Radio WEEI's Dale & Holley with Rich Keefe on Thursday afternoon, Ball senior had this to say on the subject of his son possibly coming to the Celtics.

At the moment the Lakers do own the league's second-worst record, giving them a good opportunity to select Ball, when it comes to the ping-pong balls. But, if their pick falls out of the top-three, it will end up in the hands of the Philadelphia 76ers.

Pretty sure LaVar wouldn't 'trust the process' if Lonzo were to be drafted by the city of brotherly love, but he did make it clear that he has nothing against Boston.


"It's not about me disliking the Celtics," Ball said. "It's just, we're west coast guys. I'd love for him to stay on the west coast where his brothers could see him all the time, most of the time. We're a big family. That's the only difference, but like I said, my son will play for any team on the fact that his goal was to make it to the NBA, so it doesn't matter what team he plays for."

LaVar did have high praise for 'Trader Danny' as a basketball player, and even though the two have never spoken to each other (soon enough), Ball did have this to say about Ainge


"I don't know anything about Danny Ainge, but I know when he was a player, he was one of them sticklers to get up under you, boy," Ball described. "But I haven't talked to him. I don't know Danny Ainge, I just watched him play when he was younger and I know for a white guy, you could elbow him in the face. He was going to get back up and keep playing."

This won't be the last anyone in Boston hears from LaVar Ball as he will continue to promote his son Lonzo like a prize fighter waiting to take on the world heavy-weight champ. The next few months should be interesting to say the least.

Stay tuned, it's getting good