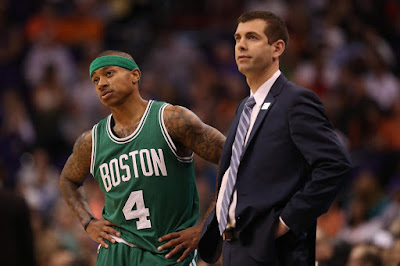 After questioning his coach's decision in the second half of Monday's loss to the Clippers, Isaiah Thomas cleared the air between him and his coach and is ready to move on.

Thomas explained that putting blame on Brad Stevens wasn't his intentions and says he was just very emotional at the time, following a loss in which the Celtics squandered a 13-point second half lead.


"I didn't mean to throw anybody under the bus. That's not me," Thomas said. "I just said how I felt at that time. My job is just to move on and do my job and don't make it a distraction, because it's not." [ESPN's Chris Forsberg]

Thomas pointed to frustration as the biggest reason for his harsh words about his coach and says he's going to have to learn to control his emotions after tough losses.


"I gotta do a better job of calming down after tough games, tough loses," Thomas added. "I'm always going to be me. And that's the only way I know how. Like I said to Brad, I'm not here to throw anybody under the bus, because I wouldn't want anybody to do that to me. That's just how I felt at that time. Yes, I have to do a better job of it and I know that. I'm here to be Isaiah Thomas and lead and win games. And I know if we win that wouldn't have even been a problem."

Following the loss in Los Angeles, the Celtics All-Star guard alluded to Stevens' decision to play Marcus Smart and Terry Rozier alongside Jordan Mickey, James Young and Jaylen Brown -- a lineup Stevens has never used this season -- in the final minutes of the third quarter.

Clinging to a seven-point advantage in the last two minutes of the third quarter, the rare Celtics lineup surrendered a 10-2 run before the final frame and the team never regained its lead as the Clippers' offense exploded in the fourth quarter, extending their run to 41-14.

"It's just the way we lost tonight was unacceptable. We lost the game in the last 15 minutes of the game. We played a really good game up until the last 15 minutes. And that's the players' fault, the coaches' fault, that's everybody in this locker room's fault. We could have done a lot better."

However, Stevens says he wasn't upset by what Thomas had to say about him after the Clippers game and understands that emotions run very high moments after a loss.


"At the end of the day, I didn't put much thought into it until it became a deal that everybody was talking about," Stevens explained. "And at that point in time, I heard from Isaiah pretty quickly. So again, I don't put a lot of stock. I understand the emotions and how high they run at the end of games, win or lose. And that's something that -- I have to go out there every day and talk after the game too and it's not an easy thing to do all the time. And so I get it.

"And I'm OK with the fact that people are going to say some things. And you may have to have that moment where you communicate back and forth. But I don't put too much stock into it to be honest." [ESPN Boston]

When Stevens was asked about Thomas questioning the lineups, Stevens explained that not having Al Horford (wrist) and Jonas Jerebko (flu) was certainly a factor.


"That may be the way that he views things, right? Maybe it's the way that he saw that stuff play out," Stevens said. "But from our standpoint, the other night it was more about bodies available and foul trouble. So it's part of it. Hey, we didn't play well."

Celtics will look to bounce back from their two-game skid on Wednesday against the best team in the league -- the Golden State Warriors -- before wrapping up their five-game road trip in Denver against the Nuggets.