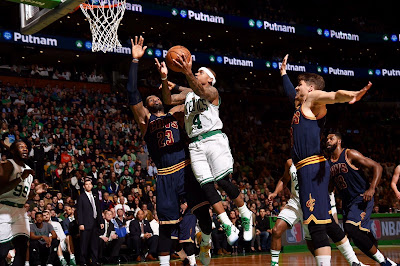 If the Cavaliers thought for one second that coming into Boston would be easy, the Celtics made sure to put the NBA champs on notice Wednesday night. In LeBron James' first trip to the TD Garden of the season, it was Isaiah Thomas, who got that last laugh in a 103-99 victory on national TV.

Two MVP candidates battled it out as Thomas finished with a game-high 31 points (10-20 shooting), 5 assists, two steals and a blocked shot. James notched his 49th career triple-double with a stat line of 28 points, 13 rebounds and 10 assists.

It was the third meeting of the season between Boston and Cleveland, but the first since the Celtics grabbed sole possession of second place in the Eastern Conferance.


"We just played to win," Thomas said. "They're the No. 1 team in the East. One of the best teams in the NBA, and we just wanted to protect home court and get a win. We did that tonight."

Jae Crowder posted a double-double of 17 points and 10 rebounds, while Avery Bradley added 11 points in only his second game back from his Achilles injury. Kelly Olynyk chipped in 10 points and Marcus Smart contributed with 9 points and 8 assists.

Al Horford recorded a double-double of his own as he grabbed 10 rebounds, dished out a career-high 10 assists to go with his 9 points for Boston, who are now 39-22 and three games behind Cleveland in the standings.

Kyrie Irving, who got into early foul trouble, scored 28 points and Derrick Williams added 13 points off the bench for Cleveland, who were without Kevin Love (knee), they are 7-3 over their last 10 games and 41-18 overall.

It was a tightly contested game between the East's two best teams, including 24 lead changes, 19 ties and the biggest deficit for either side was an eight point advantage. The deciding factor would come in the final minute of the fourth quarter.

With 3:28 left, Cleveland led, 91-90, Avery Bradley re-entered the game to guard Kyrie Irving, who had scored 15 of his 28 points in the third quarter, but had not yet hit any shots in the final frame.


“Mentally I was prepared,” said Bradley. “I was trying to stay warm on the sideline. I just knew once I got the opportunity to go back out there I was going to play as hard as I can and make sure I was focused.”

Jae Crowder hit a go-ahead 3-pointer, followed by another 3-ball by Bradley on a assist from Thomas to make a 96-94 Celtics lead with 1:09 left. Kyle Korver, who was 0-6 on the at night from behind the arc, nailed his first and only 3 of the game to put the Cavaliers ahead 97-96.

Isaiah Thomas, out of Brad Stevens timeout, hit a 3-pointer from 30-feet to put Boston up for good 99-97 with 49 seconds remaining. One of Cleveland's last opportunity to tie or take the lead came after an Irving layup and pair of Thomas made free-throws with 28 seconds left.

Irving, who has made it a point to be an assassin late in games, tried to shake off Bradley with several dribble moves, and even pushed off of him to put up a highly contested shot and missed with 13 seconds left, while Tristan Thompson (9 points, 13 rebounds) grabbed the offensive board and kicked it out to a wide open Derrick Williams, who missed a go-ahead 3.

Jae Crowder grabbed his 10th rebound of the night and hit two clutch free-throws to help the Celtics put away the Cavaliers for the first time this season.

But it was Bradley's tenacious defense on Irving's last shot attempt that proved to be the play of the night.


“That’s what I play this game for – to go up against the best players,” said Bradley. “I know I haven’t been out there for awhile, but hopefully I can still be mentioned for First-Team All-Defense (at the end of the season). It’s something I take pride in every chance I get, and I love going up against the Kyrie’s, the Russell Westbrook’s, all those guys.”

In a much needed win, the Celtics held the Cavaliers to 40-percent shooting and under 100 points, a huge improvement from Cleveland's average of 126 points and 51 percent shooting in the first two wins against Boston.

The C's will begin their five-game, post All-Star break, West coast road trip on Friday night when they take on the Los Angeles Lakers. Tip-off is at 10:30

Celtics hit 46.2 percent of their shots including 13 three-pointers (42 percent from behind the arc), Boston is currently third in the NBA in 3-pointers made at just over 12 per-contest. Isaiah Thomas has scored 30 points or more in 23 games this season. Boston improves to 17-6 with their opening night starting five of Thomas, Bradley, Crowder, Horford and Amir Johnson.