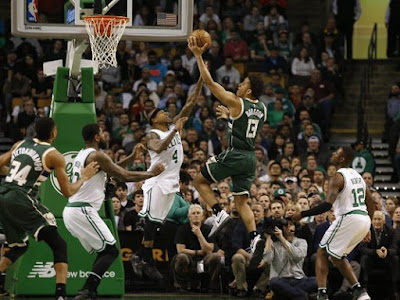 After erasing a 14-point deficit, the Celtics couldn't put a lid on Milwaukee's inside scoring and came up short in the final minutes of regulation.

Celtics made two consecutive defensive stops in the final minute -- one by Al Horford on All-Star Giannis Antetokounmpo and the other was a 24-second violation -- and Isaiah Thomas' layup pulled the Celtics to within one point (101-100).

Just when you thought the Celtics had one more stop left in him, Bucks rookie Malcolm Brogdon hit a 16-foot jumper as the shot clock expired that gave the Bucks a three-point lead with three ticks left.

In the final play of the night, Boston's inbound pass to Thomas was deflected and ended up in the hands of Marcus Smart, who double-pumped a desperation 3-pointer that was nowhere near the rim as time expired. The Bucks defeated the Celtics, 103-100 and are now tied with the Hawks for fifth place in the Eastern Conference.

Meanwhile, the Celtics are now in a virtual tie with the Cavaliers for the top spot. Bucks snapped a four-game winning streak.

The C's had a hard time trying to contain Antetokounmpo as he cruised to 22 points on 8-of-17 shots. He led four Bucks in double figures, getting help from Khris Middleton (19 points), Brogdon (16 points) and Greg Monroe (16 points).

The Bucks scored 54 points in the paint -- where they made a living throughout the night despite giving up a big lead. On back-to-back plays, Marcus Smart split a pair of free-throws and drove to the hoop for a contested layup to tie the game at 93.

However, Brogdon made a layup of his own over Bradley and converted Horford's turnover into a breakaway layup -- giving Milwaukee a four-point lead with 1:47 left. From there, the only time the Celtics pulled to within a point was when Thomas went for a layup instead of a game-tying 3-pointer before Brogdon hit the biggest shot of the night.

Offensively, the only Celtics players with some sort of offensive rhythm late in the fourth quarter were Thomas and Smart. Crowder had a poor shooting night (4-of-12), Bradley's shot was flat (1-of-6 from 3) and Horford reverted to his old ways in not wanting to even attempt a show in the final frame.

Although the Celtics made two big stops in the final minute, the four-point swing by Brogdon was enough to keep them ahead before his dagger with three seconds left solidified the win for Milwaukee. The Celtics will close out their six-game road trip on Friday when they host the Magic at TD Garden.

Malcolm Brogdon was the closer for the Bucks on Wednesday. While the Celtics shifted their focus on stopping Antetokounmpo, the rookie scored six of Milwaukee's final eight points.