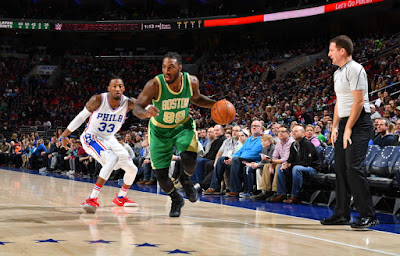 We've seen it many times before this season, where a team rallies from a double-digit deficit, hitting clutch 3-pointers in front of a cheering home crowd as all the momentum is in their favor. Such was the case at the Wells Fargo Center for the underdog 76ers, who without Joel Embiid pulled out an impressive 105-99 comeback win against the second place Celtics on Sunday.

'Trust the process' has been the motto all season for Sixers fans as over 19,400 filled the arena to witness the afternoon matinee and they sure got their money's worth. The future looks bright in Philadelphia despite Embiid (knee) and Ben Simmons (broken foot) being out for the season, rookie big man Dario Saric led the 76ers to their 26th victory with 23 points, 6 rebounds, 4 assists and 2 steals.

Al Horford led all scorers with 27 points to go along with 8 rebounds, 6 assists and 2 blocks. Jae Crowder added 15 points, 7 rebounds and 4 assists. Terry Rozier finished with 14 points and 10 rebounds off the bench, while Avery Bradley chipped in 13 points and Kelly Olynyk contributed with 12 points for the Celtics.

At the 3:41 mark in the fourth, the game was tied 91-91 when Covington hit a go-ahead 3-pointer that put the Sixers up for good. Marcus Smart made it a one possession game (100-97) with a layup before Nik Stauskas hit a dagger 3-ball with 38 seconds left to finally put Boston away.

The Celtics would miss their next five field goal attempts and the Sixers closed the period on a 14-8 run.

Horford had his season-high in points through three quarters, but went scoreless in the fourth


"Guys are really looking for me. I'm just trying to make plays," he said afterwards. We did a good job building the lead; we just need to do a better job closing quarters.

Boston, 44-26, failed to sweep their easiest week of the season and create some separation between them and the Wizards, who they'll face on Monday night when they return to the TD Garden. Celtics are still a game and a half ahead of Washington for the second seed and two and a half games behind the first place Cleveland Cavaliers.

Tip-off from Causeway Street will be at 7:30

The 76ers shot 47.1 percent from the field as the C's hit only 40 percent of their shots. Philadelphia's bench outscored Boston's second unit 43-34. Marcus Smart started once again for the injured Isaiah Thomas (bruised right knee), he finished with 8 points on 3-12 shooting, 8 assists and 6 rebounds. The Celtics are now 2-5 without their leading scorer in the lineup, it is still unknown if Thomas will be available against the Wizards.