Celtics are officially in first place after Cavaliers' loss 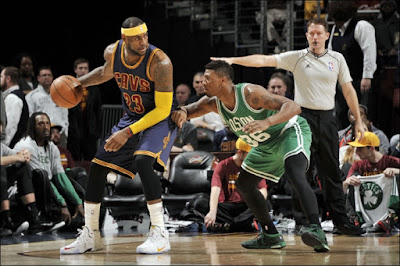 The Boston Celtics are 48-26 and officially have the best record in the Eastern Conferance for the first time this season after the Cleveland Cavaliers (47-26) lost to the San Antonio Spurs on Monday night.

With two weeks and eight games left in the regular season, the Celtics are not getting ahead of themselves, especially since they play the NBA champs one last time come April 5.

It's the second time this year that Boston has jumped up in the standings on an off day. After Sunday's win against the Heat, the C's pulled into a virtual tie with the Cavaliers. Cleveland, with nine games left, will face five playoff contenders (including the Celtics and Raptors) while Boston will take on the Cavs, Hawks and Bucks (twice) as the only teams with above .500 records.

LeBron James was asked about his team's recent skid (7-9 in March) and what does it mean going forward.

Isaiah Thomas believes the Cavaliers struggles are only temporary and that they're still the champions until another team knocks them out in the postseason.


"They've been struggling for whatever reason but it's still an NBA-championship-caliber team, said Thomas. "They're defending champions so it goes through them until someone eliminates them. I don't think you can be too worried about the things that they're struggling with right now. They're a really good team. Sooner or later they'll probably figure it out." [ESPNBoston]

Though the Celtics are not celebrating anything just yet, they know the task at hand and the bigger picture moving forward.


"It doesn't mean a whole lot right now," Brad Stevens said of his team being in first. "The whole idea is to make progress, get better every day and try to stay in the moment. You do that whether you're in last place and trying to build up, or if you're in a position where you're fighting for seeding." [Celtics.com]

The Celtics will have their work cut out for them as they look to maintain the No. 1 seed throughout the remainder of the regular season. Other than Cleveland, they still have Washington (2.5 games back) and Toronto (3 games back) to worry about before it's all said and done.

The C's will take on another team fighting for playoff positioning; the Milwaukee Bucks (38-36) on Wednesday night.