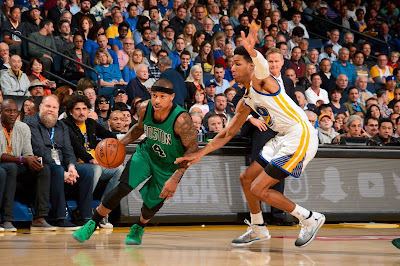 It felt like Déjà-vu as the Celtics upset the Warriors for the second straight year at Oracle Arena. In Boston's lone appearance of the season in the Bay Area, Isaiah Thomas helped secure a 99-86 victory over Golden State on Wednesday night.

"We just made it tough on them," said Thomas, who tied a game-high with 25 points. "Those are hell of a players over there -- Step Curry, Klay Thompson, we made it tough on them. I keep saying it but those three guys -- Smart, Avery and Jae Crowder -- they should be on one or two of those all defensive teams because they make it tough on everybody each and every night. Kelly Olynyk played a hell of a game. Without him we probably wouldn't have won tonight. He have us a boost off the bench."

Kelly Olynyk finished with 17 points, 5 rebounds, 5 assists and 3 steals, while Avery Bradley added 12 points and 6 rebounds. In his return from an elbow injury after a two-game absence, Al Horford chipped in 10 points, 6 rebounds and 6 assists. Jae Crowder nearly notched a double-double of 9 points, 10 rebounds and 4 assists to help the Celtics snap a two-game losing streak.

Klay Thompson scored 25 points to go along with 6 rebounds and 3 blocks for the Warriors, who are now 52-12 on the year. Steph Curry added 23 points, 6 assists and Draymond Green contributed with 13 points, 8 rebounds, 3 steals and 3 blocks in Golden State's only fifth home loss of the season.


"We're in a tough spot in the schedule and with KD's injury. Everybody goes through this at some point in the season," Warriors coach Steve Kerr said. "You just make your way through and you let everybody else freak out and panic. You just keep your nose down, keep working and things work out."

Golden State would take a 74-72 lead into the final frame after a Steph Curry buzzer beating 3-pointer over Jaylen Brown, as the two-time reigning NBA MVP looked to have some words after the shot towards the Celtics rookie.


"It was cute...I didn't say anything to anyone to be honest," Brown said. "I think my defense was doing the talking, I was playing good D until he beat me on that head fake."

That would be Curry's last made 3-point attempt as the Celtics led 76-74 with 8:41 remaining before Green's back-to-back dunks put the Warriors ahead for one last time. Boston went on a 14-0 run, including back-to-back 3's by Jae Crowder to take a 90-79 lead and they never looked back.

The Celtics would force nine of the Warriors' 18 total turnovers in the fourth quarter alone, while limiting Curry (0-1) in five minutes and Thompson (0-3) in eight minutes to score zero points each.


"They did a good job of guarding the 3," Thompson said. "Teams know we can kill them from 3."

Curry and Thompson combined to shoot just 4-for-17 from 3-point range as Golden State only hit 6 of their 30 attempts from deep, struggling again without Kevin Durant in the lineup.

Boston snapped the Warriors' 10-game home win streak and their streak of scoring at least 100 points at Oracle in 56 straight games. It was also their first lost to an Eastern Conference team in front of their home fans this season.

For the second time in back-to-back seasons the Celtics went into the league's most toughest arena to win in and picked up a victory. It was the C's lockdown defense, something Brad Stevens' team prides themselves on when it comes to playing elite clubs.

The Celtics are now 2-2 on the their West coast swing, and 41-24 overall. They look to wrap-up their road trip on a positive note when they take on the Denver Nuggets, who are battling to hold on to a playoff spot. Tip-off is 9:00 PM on Friday night.

Boston assisted 28 times on 37 made baskets to go with 12 steals on the night. Both teams would attempt and make the same amount of shots, going 37-for-84 (44 percent from the field). Golden State also finished with 13 blocks.