Celtics 109 - Pacers 100: Impressive win over Pacers puts the Celtics in position to grab No. 1 seed 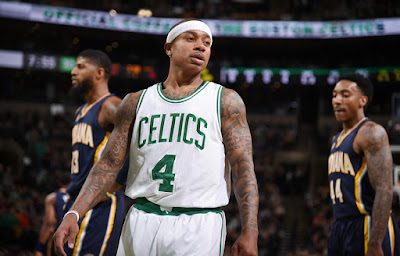 Don't look now but the Celtics are now in stride to top the Cavaliers for the No. 1 seed in the Eastern Conference.

With 10 games left in the regular season, the C's are trailing the champs by one game and are showing no signs of slowing down. In Wednesday night's 109-100 win over the Pacers, all nine Celtics players played a role in taking care of home court for the second straight night.

Paul George (37 points) and Jeff Teague combined for 42 points to lead the Pacers but the Celtics' intensity in the second half disallowed their opponent to regain their first-quarter lead.

The Celtics offense tightened up in the second half, efficiently taking care of possessions and flawlessly rotating the ball for easy layups and open shots. It seemed like every player did their part in either rebounding, finding an open guy or making a defensive stop.

The team's second unit made their presence felt in the first half. The Pacers' back court duo of Monta Ellis and Aaron Brooks found their outside touch but so did Marcus Smart -- who drained two back-to-back 3-pointers in the second quarter -- and Jaylen Brown took advantage of his size over 6-foot-3 Ellis.

After the starters checked in, Crowder and Thomas knocked in a pair of 3's to top off a 10-2 run and gave the C's a seven-point lead (44-37) in the winding minutes of the first half. George's 14 first-half points certainly kept the Pacers within striking distance but the Celtics still managed to pull away in the third quarter -- where they grabbed their first double-digit lead of the night (65-54) with 6:38 left.

Zeller played "the enforcer" role for the Celtics -- setting tough screens, defending down low and finishing strong in the paint. Crowder found his offensive stride by making backdoor cuts for easy two's and Olynyk was aggressive whether it meant pulling down rebounds, putting the ball on the floor or dishing out assists.

The C's ended up tacking on 39 third-quarter points but unlike the first 24 minutes, George's 14 points (28 through three quarters) didn't keep Indiana relatively close as Boston took an 88-74 lead into the final frame.

The Celtics (46-26) will have to wait two weeks before they can face the Cavaliers (46-24) in their third and final meeting of the regular season but will look to take advantage of some more home cooking as they continue their six-game home stand on Friday against the Suns.

Through three quarters, the Celtics shot 55.4 percent from the floor, including 10-of-21 from deep. Boston's second unit combined for 32 points on 14-of-24 shots on the night.