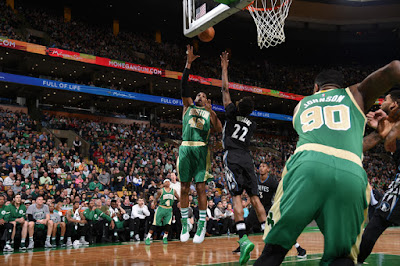 At halftime, it felt like the Timberwolves were going to push the Celtics to a nail-biting finish but the Celtics had other plans.

Heading into the second half, the Celtics rallied behind an offensive run, buckled down on defense and eventually diminished any hopes of seeing Minnesota pull off an upset.

Horford, who flirted with a triple-double, led the Celtics in rebounding (9) and assists (8), Avery Bradley added 18 points and Marcus Smart (5 assists) and Kelly Olynyk each chipped in 10 points off the bench.

In a back-and-forth, neck-and-neck entertaining first half, the Timberwolves grabbed control of the tempo by grabbing the first double-digit lead of the night halfway through the second quarter (46-36). That's when the Celtics' leading scorer took control of the offense.

Behind Isaiah Thomas' 14 second quarter points, the Celtics closed a 10-point deficit down to two (60-58) just before halftime. Boston kicked off the second half with a 14-4 run to grab an eight-point lead (72-64) before the Timberwolves tipped the seesaw into their favor and pulled to within three (78-75) with less than three minutes left in the third quarter.

However, the Celtics took a 15-5 run into the final frame and eventually grabbed an 18-point advantage -- their biggest lead of the night -- with five minutes left in the fourth quarter. Boston outscored their opponent, 59-44, in the second half and for the second straight game cruised to another victory.

The Celtics will head to Brooklyn to take on the Nets on Friday -- where they will look to make it three wins in a row.

Horford's 20-point performance is the first time he's scored at least 20 points since Jan. 25 against the Rockets. He finished 9-of-12 from the floor and was an impact on offense alongside Thomas and as a team the C's shot 54.4 percent and finished with 34 assists.