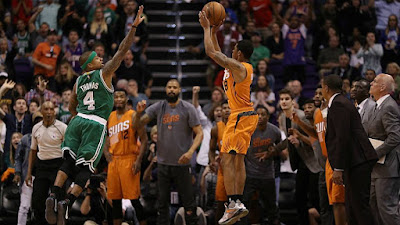 After pulling his team out a big hole, Isaiah Thomas committed the biggest turnover of the night and Suns rookie Tyler Ulis made him pay.

The Celtics erased a 15-point deficit in the fourth quarter and with 41 seconds left were clinging onto a two-point lead (104-102). Suns guard Devin Booker missed a chance to tie the game before Celtics rookie Jaylen Brown pulled the rebound and was intentionally fouled.

Brown split a pair of free-throws and so did Thomas after Eric Bledsoe's layup pulled his team to within two points. With 11 seconds left, Bledsoe made another layup to tie the game and when Jae Crowder gave an inbound pass to Thomas, Suns rookie Marquese Chris hit the ball off of Thomas' leg before Ulis picked up the loose ball from behind the arc and drained a game-winning 3-pointer as time expired.


"We should have put the game away a long time ago and they came down and executed and tied the game," Crowder said. "Miscommunication on my end. I should have threw the ball into IT probably a little earlier. I put him in a bad situation and we lost the game."

While Thomas was quick to mention that although he didn't think the pass was the reason the Celtics lost the game, he also thought the pass was made later than he anticipated.


"I thought Jae would get it off quicker than he would," Thomas explained. "I don't know if he was looking to see if we had a timeout or I don't know what he was looking to do -- not saying it was his fault. But when I looked down, I thought he would get it out quicker so we could go and then I looked away, looked back and Marquese Chriss was right there, he got a hand on it. I couldn't get full control of it."

Thomas finished with a game-high 35 points, Crowder had a double-double (16 points, 10 rebounds) and Jaylen Brown scored 14 points and pulled down 6 rebounds. Terry Rozier led the bench with 14 points and Amir Johnson added 13 points and 8 rebounds.


"We should have won," Thomas said. "But they hit a crazy shot. We turned the ball over at the end and if you turn the ball over on the road, things like that happen. We have to do a better job of finishing games and we didn't do that tonight. So that's why we lost."

The Celtics look to bounce back from their loss when they continue their road trip back up to L.A. to take on the Clippers.

The Celtics allowed 52 points in the paint but managed to out-rebound the Suns, 54-50. C's were also without Avery Bradley (Achilles) and Al Horford (elbow). No word if either guys will be back in action on Monday to take on the Clippers.