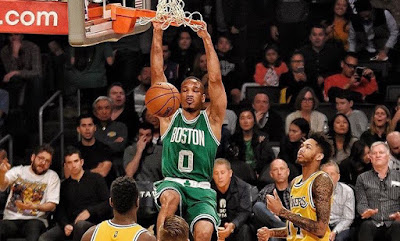 Boston looked like a well-oiled machine at the Staples Center on Friday night when they led by as many as 31 points through three and a half quarters before Los Angeles cut the deficit to 15. But it was Brad Stevens' bench who made sure to give Isaiah Thomas a much needed rest in the fourth as the Celtics held on to beat the Lakers 115-95.

Thomas finished with 18 points and 8 assists in 26 minutes of action, while Al Horford added 17 points. Jaylen Brown led the second unit with a solid 16 points and 8 rebounds, including a few dunks and one acrobatic alley-oop layup for the highlight reels. Avery Bradley, in his third game back from injury, scored 15 points to go along with his 4 rebounds and 4 assists.

For the Lakers, it was Jordan Clarkson who led the way with 20 points off the bench while D'Angelo Russell added 17 points and 4 assists. Julius Randle chipped in 13 points and 7 rebounds for the Lakers, who have lost six in a row and are 19-43 overall.

This had the makings of a blowout from the opening tip as the Celtics finished with 70 first half points to the Lakers' 45.


“I thought we were playing with great purpose,” Brad Stevens said after the game. “I thought we got the ball to the right guys in the right situations.”

But it was Los Angeles' 33-point third quarter outburst, including Clarkson scoring 13 straight in the final four and a half minutes, that cut the deficit (93-78), while the Celtics only managed to put up four points in the span.

However, the Lakers failed to ride their momentum to begin the final frame and the Celtics jumped to a 10-0 run and Jaylen Brown scored six points in a row to extend their lead 105-82 while Isaiah Thomas cheered on his teammates from the bench.

The Celtics ended the night with 30 assists on 43 made baskets while shooting over 51 percent.


“Just making the right play,” said Isaiah Thomas of his team’s high assist rate and sparkling assist-to-turnover ratio. “Moving the ball side to side, making the easy play for the most part.”

With 20 games remaining, Boston is now three games ahead of the Washington Wizards, who lost to the Raptors, for the second best record in the East. They will continue their West coast road trip when they head to Phoenix to take on the Suns Sunday afternoon.

Boston won the battle of the glass, out-rebounding the Lakers 58-44. Tyler Zeller was out due to an illness. Gerald Green was cleared to return from injury, but received a coach's DNP against Los Angeles.