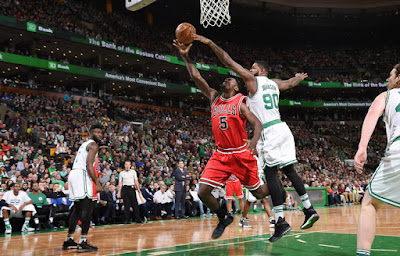 The Bulls needed the second quarter to reach double figures in points, the third quarter to score at least 30 and a miracle to close their deficit.

The Celtics not only held Chicago to nine first-quarter points in Sunday's 100-80 blowout victory, they also played with the kind of defensive intensity that should put them in great position to grab the second seed in the Eastern Conference, and hold onto it.

The Celtics' defense set the tone early as the Bulls finished the first quarter 3-of-22 from the floor. Avery Bradley and Jae Crowder were very physical with Chicago's best scorers -- Jimmy Butler and Dwyane Wade -- and kept them in check throughout the afternoon. Wade (8 points) and Butler (5 points) combined for 13 points on 6-of-22 shots.

The Bulls never led once.

Isaiah Thomas finished with a game-high 22 points, Bradley added 17 points, 6 rebounds and three steals and Al Horford in 12 points, 7 rebounds and 6 assists. They led six Celtics players in double figures -- Marcus Smart led the bench with 12 points, alongside Kelly Olynyk and Jaylen Brown who each scored 11.

Robin Lopez and rookie Denzel Valentine each scored 13 points to lead the Bulls and Bobby Portis finished with 12 points and 8 rebounds.

Boston's commitment on the defensive end disallowed the Bulls to find their offensive rhythm and much like we've seen throughout the regular season -- the Celtics' defensive stops catapulted their offense. But it wasn't just a few guys creating stops, it was a group effort.

With 15 games remaining in the regular season, the Celtics (42-25) are in a tie with the Wizards for second place but due to their relatively light schedule, have a great opportunity to head into the playoffs with the second best record in the east. This week, the C's will take on the Timberwolves, Nets and 76ers -- three of 11 below .500 teams that are left on the remaining schedule.

Meanwhile, the Wizards will take on six teams that are above .500, including the Celtics at TD Garden, later this month.

Although the Celtics' defense has been anything but extraordinary this year, they entered Sunday's game ranked in the bottom half (17) in defensive efficiency, Sunday's win showed how tough they are when they're committed to making stops. In their biggest wins against the league's best teams (Warriors, Cavaliers), the Celtics were victorious because of their defensive efforts.

If the Celtics can consistently defend at this level, second place will be theirs and give them just the kind of momentum they need heading into the playoffs. Their next chance will be on Wednesday when they host the Timberwolves.

Horford and Amir Johnson each finished with two blocks and a number of stops, while the Celtics bench -- led by Smart and Brown -- combined for 5 steals. The Celtics finished the night with 14 steals and coerced the Bulls to commit 17 turnovers.