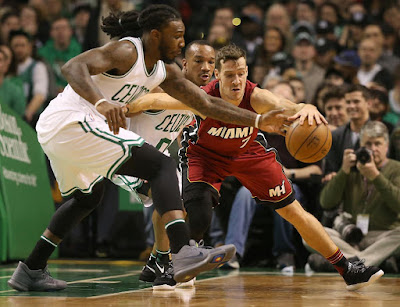 It's not something you see on a consistent level but when the Celtics front court put together the kind of production we saw against the Heat -- on both ends of the floor -- Boston is very difficult to beat.

Anchored by Jae Crowder, the Celtics front line was sensational against the Heat and made all the difference in the second half, where the C's grabbed their first double-digit lead and eventually their 48th win of the season.

After beating the Heat 112-108, the Celtics now hold the most wins in the Eastern Conference and are tied with the Cavaliers for the No. 1 seed.

Crowder got it going early, knocking in mid-range jump shots and easy layups in transition. He also forced turnovers on the other end (two steals, two blocks) and his intensity was contagious. Crowder finished with 25 points on 8-of-13 attempts, including 3-of-5 from deep to go with his 6 rebounds.

With 3:53 left in the game, Crowder drained a 3-pointer to recapture the Celtics lead (102-101) and ignited the loudest roar of the night at TD Garden.  From there, Thomas took care of the rest -- scoring six of the following eight points for the Celtics (108-105) and before the Heat attempted to make a final push, Boston's defense made a crucial stop that led to a loose ball foul on Goran Dragic.

Marcus Smart split the pair but on the rebound of the second attempt, Heat center Hassan Whiteside appeared to have grabbed the ball early before letting it bounce off the rim. After officials' review, Whiteside was whistled for goaltending and the Celtics were awarded two points and a two-possession game.

Thomas scored a game-high 30 points but Crowder's play, along with the rest of the starting front line, certainly stood out the most on Sunday. It complimented Thomas' scoring and exemplified how tough the Celtics are when Crowder, Horford and Johnson are on point.

While the Heat were trying to put the defensive clamps on him and Thomas, Amir Johnson was making himself available in the paint -- where he was a perfect 5-for-5 and even cranked up one of his set shooting 3's at the top of the key. He also made his presence felt against Miami's big men, making defensive stops in the paint and swiped two steals.

Meanwhile, Al Horford did the dirty work and it didn't go unnoticed. The Celtics big man was altering shots, dishing out pretty assists and cleaning up the glass. He finished with 10 rebounds and 8 assists to go with his 7 points.

Celtics played catch-up throughout the first half before finding their offensive rhythm. After the Heat scored the most of their most points in the paint and built a 15-point lead, the Celtics then took a page out of Miami's playbook by making moves towards the basket and finishing strong. Bradley got it going after checking back in midway through the second quarter and Horford kept it going -- making plays with his back towards the basket and finding his teammates down low.

Thomas made 6-of-7 from the free-throw line and Smart picked up his defensive intensity -- forcing a pair of Heat turnovers minutes before the half commenced. By the end of the first half, the C's only trailed by five (58-53).

After the break, the Celtics wasted no time in erasing their deficit as they went on a 10-4 run in the opening four minutes and grabbed a 63-62 lead. But the Heat weren't done, putting together a 13-3 run and regained the lead (95-94). However, the Celtics stuck around, played tough defense and converted shots down the stretch.

The Celtics have no won four straight throughout their six-game home stand and eight of their last 10. C's will host the Bucks on Wednesday before closing out their home stand on Friday against the Magic on Friday.

Celtics finished with 52 points in the paint. C's made it a point to get high percentage shots were a modest 8-of-24 from deep.