Brooklyn Nets say Kevin Durant will not be traded 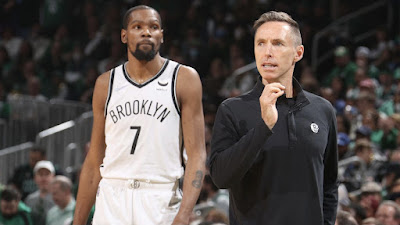 The standoff between the Brooklyn Nets and Kevin Durant is over, as both parties have agreed to move forward with their partnership.
According to a statement released by the Nets Tuesday morning, general manager Sean Marks, head coach Steve Nash, team owners Joe and Clara Wu Tsai met with Durant and his business manager Rich Kleiman in Los Angeles Monday.


Durant requested to be traded back on June 30 with a list of preferred destinations, while going as far as giving an ultimatum in early August to either be dealt or fire both Marks and Nash.
The Athletic's Shams Charania reported that following a meeting between Durant and Joe Tsai in London a few weeks ago, the superstar stated "he had no faith in the team's direction." Teams like the Phoenix Suns and Miami Heat -- which were on Durant's wish list -- simply could not meet Brooklyn's asking price and other potential suitors weren't willing to pull the trigger either.
ESPN's NBA insider Adrian Wojnarowski called the Durant and Nets situation similar to that of the late Kobe Bryant, who ironically would have been 44-years-old yesterday, and the Los Angeles Lakers in the summer prior to the 2007-08 season.

"In the end, Kevin Durant and the Nets played out in a similar way to Kobe Bryant and the Lakers in 2007: A tumultuous summer after a trade request, talks with teams, no deal and ultimately a decision to return to the franchise."

Another possible suitor that was rumored to have the best trade package for Durant, was the Celtics and it centered around All-Star Jaylen Brown. However, those headlines had died down recently following a report that Boston was "not close to a deal" for the former league MVP and that the Nets initially wanted both Brown and Jayson Tatum in return.
With Durant sticking it out in Brooklyn for now and presumably for the rest of the four years left on his deal, it's going to be an interesting 2022-23 campaign in the Atlantic Division as the Celtics look to get back to the NBA Finals.
Joel Pavón
Follow @Joe1_CSP