After a season of disappointment, what's next for the Celtics? 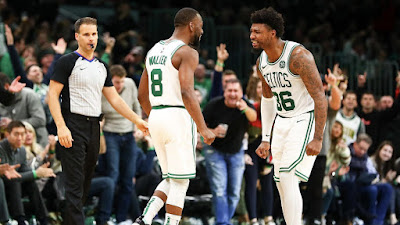 It's the collective feeling of relief. The kind of relief when you finish an exam, even knowing you likely failed it. Just knowing that the anxiety of dealing with the pain of the task at hand is over and you can move on with your life.
Sound familiar? That was the 2020-21 Celtics after about game number ten this season. They looked like a disjointed team that struggled to find any rhythm or look half as cohesive as they were just weeks earlier in their 2020 playoff run to the Eastern Conference Finals.
Is there anything good to take from the 2021 Boston Celtics season? Maybe. The emergence of Jayson Tatum as the NBA’s next preeminent scorer? Jaylen Brown as a bonified All-Star? Robert Williams finally delivering on some of his potential. All good things and a doorway into what a foundation to the Celtics could be as we move away from this dreadful season.
The bigger question moving into the summer is where do the Celtics go from here? With the bomb drop of Danny Ainge's retirement and the position change for Brad Stevens from head coach to President of Basketball Operations, the madness has already begun.
As for the roster, the Celtics are already slated to be pressed up against the luxury tax threshold with Evan Fournier, Semi Ojeleye, and Luke Kornet all out of contract in the coming offseason.
Even if Boston allows the trio of veterans to walk, the team is still only about $2 million under the tax threshold, meaning if they take their draft picks in the 2021 draft alone they will be paying a luxury tax for a Fournier-less lineup returning from 2021's underwhelming performance.
So what can they do? What could a successful summer look like for the Celtics? Here are some avenues that might be worth discussing:
Operation Kemba Drop -
The least quick and easy will be the movement of the Celtics most detrimental contract this century, Kemba Walker. While at that moment the quick thinking of Danny Ainge to swap and sign Walker in the summer of 2019 seemed like a good idea, two years into (what could be) four-year max contract is looking quite bad. Walker had a solid first regular season with Boston in 2019-20 but ended with concerns about his knees having major damage that would limit his quickness and explosiveness as he entered his 30's. Less than a year later, it looks like those fears have been realized.
Walker looked like a shell of his All-NBA self and took yet another dip in his scoring and efficiency number in 2021. While Kemba can still score in bunches, the fit with Tatum and Brown seems to have dissolved the last 6-8 months with the emergence of the two, who clearly don't need more iso-driven ball dominant scorers on the roster.
How does this get resolved? Easy. Find a trade partner…right? While this seems like something that would be feasible, the problem will be selling another franchise on taking one of the leagues biggest contracts for the next two years on questionable knees. Walker in a vacuum is still a viable top three scoring option on a playoff team but the question will be how often he is on the floor to perform. If a team thinks that can be 65-75 games a year, the risk might be worth the reward.
Now, who would be willing to make the swap (maybe)? Boston's list of trade suitors is short, at best. The potential to ditch Walker is limited to three teams in my eyes:

1. New York Knicks: why would they take on Kemba you ask? Simple, New York has been a black hole for years and no major free agent has even mildly considered signing to play in the Mecca. To land stars they can either make them (drafting) or trade for them.

Though Kemba is somewhat damaged goods, the Knicks have a chance to add a marketable star to their young core who is a hometown name. Kemba may not be the star power of a LeBron James but he does still have a recognizable name that could help the Knicks build on a great 2021 season.

So, what does the deal look like? (Kemba Walker and Marcus Smart for a conditional Knicks 2022 1st round pick)

Boston essentially gives away its 2021 starting backcourt for a top-8 protected 2022 1st round pick. Why? Assets. The next step is to see if there is a player they can fit in their newly created cap space via free agency or trade.

2. Oklahoma City Thunder: OKC love draft picks, Boston has little need for more mid-1st rounders on their roster, and they have a big contract they want to dump. All told, a Kemba Walker and 2-1st round pick combo for Al Horford MIGHT be something that gets it done. While the Thunder takes on more salary the next two years, they do get the superior player and…more draft picks.
Boston doesn't get total relief from the Walker deal by taking in Al Horfords $27 million in 2021-22 but they do get a great locker room guy, a rotational big, and about a $9 million cushion from the luxury tax ceiling. That may not sound like much in terms of savings but it does open the possibilities for building trade scenarios for Marcus Smart, Robert Williams, or sign and trades for Evan Fournier.

3. Houston Rockets: The wild card. This one is probably the least fun but hear me out. Kemba Walker for John Wall. Before you say anything, YES I know the contract stinks. The difference between the two is simple. While Kemba is more well liked, John Wall is the BETTER FIT for Boston. Kemba is still the superior scorer and shooter but Wall does more for a team that needs other skills. Wall is the superior playmaker, interior scorer, and defender. Plain and simple, he is more of what you need now.
The Celtics would need to decide on if they are willing to take on an even bigger contract the next two years but could send some filler back the other way to even out the deal. The other add-on could be moving Tristan Thompson's $9.7 million to make the salary movement a net deduction for 2021-22 by about $1 million.

This move would also initiate movement elsewhere on the roster with your picks, Marcus Smart, Robert Williams, and sign and trade Evan Fournier all still useful assets.
Moving on From Winning Plays -
Finally, moving on from Green Teamer homeboy Marcus Smart. Smart's "shooter gonna shoot" mentality has helped get the Celtics into and out of games over the last several years and I hope everyone has taken notice. Like him as much as you want as a "leader" and hustle-first guy, but the facts are that he is about to enter unrestricted free agency and will command a pay increase.
Smart is an elite defender and energy player but his chaotic offensive game with minimal playmaking has caused issues that are not spoken about enough. If you spend some time with the tape, Smart’s poor shot selection and overshooting clearly have impacted the young stars. While the chemistry off the court seems to be good, the on the court tells a different story. I implore Green Team basketball junkies to watch closely at how Marcus Smart's "no pass possessions" tend to help start or extend periods of catatonic, lazy offense by Boston. Its quite remarkable.
The recent temperature on Smart’s value around the league was "a first rounder" according to an unnamed NBA Executive. This tells me that he HAS value but its not as a top-3 or top-4 player on a good team.
Smart in a package with several other players or picks might be enough to get someone to move but the consensus is that the Celtics will need a willing trade partner and a scenario in which they can turn the career Celtic into a valuable rebuilding block