Report: Does Gordon Hayward want out of his Celtics contract? 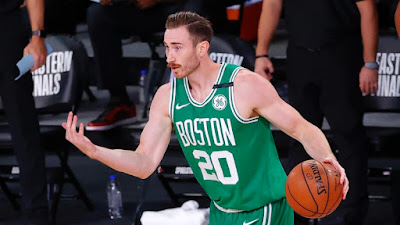 So far during this offseason, there continues to be no clear indication of Gordon Hayward's future with the Celtics.
Hayward has a $34.2 million player option that he can opt into the final year of his current Celtics contract, and it was assumed by most that the veteran forward would cash in due to his history of injuries and the financial uncertainty around the NBA.
But according to The Ringer's Ryen Russillo, who made an appearance on the latest episode of "The Bill Simmons Podcast," reported the Hayward "does want out" of the last year of his deal.
Russillo also points out that Hayward wants assurance of a long-term deal before he officially declines his player option.

"He's not opting out of that huge number unless he knows he's getting the deal," Russillo said on Tuesday.

Whether the 30-year old is looking to sign a long-term deal in Boston or elsewhere is anyone's guess, as it may be in Hayward's best interest to secure a new contract ahead of the summer of 2021 -- which is set to have plenty of sought after free agents following a possible 72-game shortened regular season.
ESPN's Zach Lowe and Bobby Marks suggested that there's "buzz" around the league that Hayward may opt-out and seek a long-term deal, but not with the Celtics, much like his former teammate Al Horford, who took his talents to the Philadelphia 76ers after signing a four-year $109 contract.

"I think what his agent Mark Bartelstein is doing right now is canvassing the league," Marks said last week on the Lowe Post Podcast. "He's doing the Al Horford plan."

While the Celtics could actually benefit in re-signing Hayward, there's still no league-wide salary cap that has been set yet for the upcoming season and the former All-Star has also been the subject of many trade rumors already.
Though Hayward has still not been given a deadline to make a decision on his player option, you have to assume his agent is doing research on what's the next move, despite a global pandemic that is sure to make an impact on players' salaries.