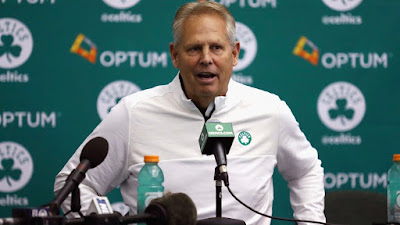 In just a few hours the 2020 NBA Draft will get underway and the rumor mill continues to spin when it comes to where the Celtics want to land.
Marc Stein of the New York Times reports that Danny Ainge is looking to move into the top-3 of tonight's draft.

The Celtics keep searching for trade pathways to get into the top three of tonight's NBA Draft, league sources say. 10-ish hours left to find one ...


As it currently stands, the Minnesota Timberwolves have the No. 1 pick, followed by the Golden State Warriors at No. 2 and the Charlotte Hornets with the No. 3 selection, as one of the spots that Boston reportedly wants. If this supposed rumor is in fact true, it means the Celtics are interested in either Anthony Edwards, James Wiseman, or Oneyka Okongwu.
With the Celtics delaying Gordon Hayward's deadline until Thursday to opt-in or out of his player $34 million player option, a sign-in-trade scenario could be in play to move up to Ainge's desired slot. It also appeared that Kemba Walker was reportedly shopped around, for picks to offer New Orleans for Jrue Holiday, per The Ringer's Kevin O'Connor, but the Milwaukee Bucks swooped in with a trade on the table that no team would refuse Monday night.
Ultimately, a package of three first round picks and some young talent could get a team like the Charlotte Hornets to at the very least accept a phone call from Ainge. But what's not in the Celtics' favor is the fact that their young talented trade prospects consists of projects that didn't exactly have the greatest of rookie seasons i.e. Romeo Langford.
Despite tonight's draft being a relatively an unknown one, the asking price for teams with high lottery picks has already been steep. While Hayward may want out, he also might be the Celtics most valuable trade chip if Ainge plays his cards right to slide up the draft board.
In the meantime, watch the madness continue as tonight's draft kicks off at 8:30 pm EST.