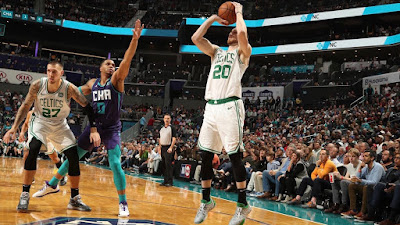 The Celtics remain in talks to not lose Gordon Hayward for nothing in return, following reports of the former All-Star agreeing to sign a four-year, $120 million deal with the Charlotte Hornets.
Per ESPN's Adrian Wojnarowski, both teams are still engaged in sign-and-trade discussions days later.

Whatever the final details, Gordon Hayward is headed to Charlotte on a four-year, $120M contract. https://t.co/o9DqjEZeYj

While a third team is likely needed to take Nicholas Batum's $27 million expiring deal off the Hornets' hands, a sign-and-trade would benefit both the Celtics and Charlotte. For Danny Ainge a huge trade exception would definitely come in handy that could be used over the next calendar year. As for the Hornets, they can avoid a waive-and-stretch of Batum's contract at $9 million of dead cap money for the next three seasons, essentially turning Hayward's new contract into nearly $40 million for the first three years of the deal.
It was more than a year ago when the Celtics and Hornets were able to workout a sign-and-trade for both Terry Rozier and Kemba Walker. A trade exception (TPE) would give Ainge plenty of flexibility to make a move in the future, since he would have up to a year to use it in any potential trade.
After losing Al Horford to free agency last offseason, the Celtics would prefer that not happen again in this case with Hayward. Either way, it would be in the best interest of both teams to come to an agreement at some point sooner rather than later.

Charlotte has to do ONE of these things to give Gordon Hayward a 4-year/$120M deal. Not all of them. https://t.co/zyWun2a4mx