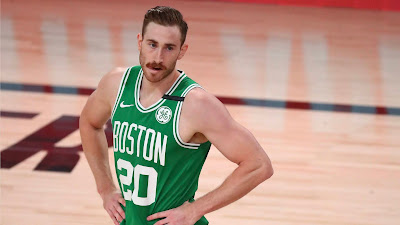 The Celtics offseason is hindered on whether Gordon Hayward picks up his $34.2 million player option, re-signs in Boston long-term or becomes a free agent.

While Danny Ainge is waiting on which direction to take, Hayward is reportedly doing his own research on what type of deal is possibly available in an uncertain open market.
If the veteran forward opts in to the final year of his current contract, the Celtics' future is somewhat secure for at least one more season. But, according to NBA insider and ESPN writer Bobby Marks, he believes Hayward is currently exploring all options in securing a possible new long-term deal.
Marks, who was the former Brooklyn Nets general manager, says the word on the streets is Hayward is looking elsewhere for an unexpected multi-year offer.

Horford, Hayward's former Celtics teammate, was in a similar situation in the summer of 2019, which ended with the big man not picking up the final year of his contract in Boston and inking a new four-year deal with the Philadelphia 76ers worth $109 million. While it's not expected that Hayward will command the same kind of dollars Horford was offered a year ago, Zach Lowe says there's enough chatter around the league that means something could be brewing.

"There's some buzz out there and I can't figure out what the buzz means," Lowe said on his podcast. "The buzz that I'm hearing is like the smoke, the smoke indicating that something is happening. I'm not sure what's up but I don't think it's a lock that Gordon Hayward is on the Celtics next year."

One team that Marks believes could offer Hayward a good two or maybe three-year deal is the Atlanta Hawks.

"I think Atlanta is a wildcard in this whole offseason here as far as adding guys, veteran guys trying to kind of accelerate the rebuild a little bit now," Marks said. "And how does Gordon Hayward fit in there at a $24, $25 million number because they've got the cap space to do it"

Atlanta, who Lowe notes is "yearning" to make the playoffs and Hayward could be the veteran to help out All-Star Trae Young and the promising talents of Jason Collins and Cam Reddish to name a few get over the hump.

If Hayward were to walk, the Celtics would only have an extra $2.3 million to spend on a potential free agent, basically having a full $9 million on a midlevel exception instead of roughly $5.7 million if Hayward were to opt into the final year of his deal.
Whatever the case may be, there's no telling how much Hayward is truly considering a change of scenery or is this all just a mystery in what will shape into a strange offseason of free agency.