Report: Celtics looking to trade first round picks to move up in NBA Draft 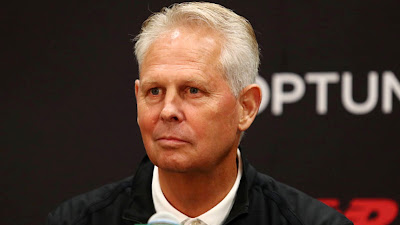 Celtics president of basketball operations Danny Ainge has reportedly offered this year's three first round picks to teams in an attempt to move up in the NBA Draft.
According to The Ringer's Kevin O'Connor, the Celtics have not gotten a response from any of the lottery teams ahead of them.

"The Celtics have offered their three first-round picks (Nos. 14, 26, and 30) in trades to try and move up, according to multiple league sources," writes O'Conner. "So far, no one is biting."

If Ainge can't get any takers for the three picks, O'Conner has New Zealand Breakers guard R.J. Hampton as the player who the Celtics should select in his latest mock draft -- especially if Boston loses Gordon Hayward via trade or free agency.

"If the Celtics stay here, Hampton would make sense because he could serve as a spark-plug scorer off the bench," writes O'Conner. "If Gordon Hayward were to leave Boston, secondary shot creation would be needed sooner rather than later."

It is no secret that not many want to help Ainge due to his track record of coming out the victor in most trades he has pulled off during his tenure in Boston. If any team is serious about moving down in the draft and taking up additional roster space, you better believe they'll want something more in return to sweeten the deal.
While most know around the league that the Celtics have a crowded roster, this year's draft is particularly an unknown one due to the pandemic. Bringing in three guaranteed contracts without any certainty regarding the NBA salary cap for next season is a tough enough challenge to deal with for any team, let alone Boston.
The Celtics are still able to trade up but Ainge will have to throw in some players in a package deal that could mean the likes of Robert Williams or Grant Williams -- who they would prefer to keep. But a separate deal or two could also be in the works, trading the No. 14 pick to one team, and picks 26 and 30 to another. Either way, the price tag to part with all three, especially the higher you want to go in the draft, may have to include a Romeo Langford or even a Marcus Smart.
In a rumored week draft, how much stock do lottery prospects like Onyeka Okongwu, Tyrese Haliburton or Killian Hayes really have and is Ainge willing to include arguably the association's best defensive guard in a deal?
Worst comes to worst and if Ainge can't find a trade partner, he could very much hold to the No. 14 pick and draft a scorer off the bench and use the other two as draft-and-stash picks to alleviate the log-jam that is the Celtics roster.
With the 2020 draft quickly approaching it will be interesting to see if "Trader-Danny" has one more draft day trick up his sleeve.