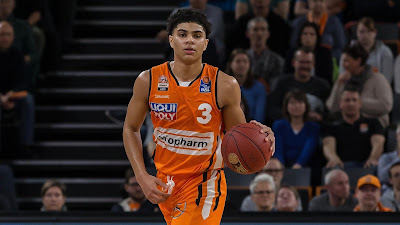 Once again, what seems to be a yearly tradition, the Celtics are linked to impactful trade rumors and perhaps this time around it won't be all smoke and mirrors.
Looking back at last year's roster, they suffered from a lack of consistency from backup point guard Brad Wanamaker, who can be an utterly average player. If Boston hopes to make it to the NBA Finals, they'll need to find a way to upgrade at this particular spot.
Kemba Walker's health will be the key to future success and a trustworthy co-pilot needs to be ready to handle the reigns when the All-Star is listed as "DNP-Rest."
Enter 19-year-old French ballplayer Killian Hayes, who has a sick name for a talented prospect slated to go long before Boston is slated to pick at No. 14. But he is worth talking about because potentially they can swing their multiple firsts and trade up for Hayes.
From what I've gathered, teams seem to not know what to make of this draft. Some say Anthony Edwards and James Wiseman aren't worth the first pick and Hayes has a better argument for that honor. Regardless, having no concrete clear No. 1 in any draft is a recipe for chaos. Here's hoping the Celtics can take advantage of it.
Playing this last season in Germany for the ratiopharm (yeah, their team name doesn't need to be capitalized. What a world) Ulm, Hayes chances to win the EuroCup was cut short by COVID-19, ending the season prematurely and only making it to the semifinals before play was stopped.
Hayes' role overseas was primarily as a guard and the creator off the ball, his free throw and three-point percentages will need improvements, but if taken by the Celtics he couldn't have asked for a better landing spot. Just look at what coach Brad Stevens' infrastructure has done for Marcus Smart and Jaylen Brown. Hayes has a mean left-handed dribble, which'll surely diversify the offense. Walker is right-handed, as is Smart. A leftie holding the ball will probably disrupt the natural offensive flow at first, but given time could come in handy and add a needed aurora of unpredictability. A drawback for Hayes is he isn't ambidextrous, then again what player really is? But, his right hand dribbling does need work.
Hayes can shy away from contact which is a shame because his touch around the basket is special. He can score on all three levels (paint, mid-range and from deep). He's a strong force when running downhill on the break and doesn't succumb to tunnel vision. His high IQ gives me hope he'll fit like a glove in a competent NBA offense.
Defensively, Hayes has a ways to go. Despite being quick he can be taken off by the dribble, and in one-on-one situations he borders the line of being a liability. While not a bulldozer he can evade opposing teams screens and recover after being hit. His effort rarely dies, something the Celtics value in their prospects. That's why Smart was Ainge's choice when analysts had him selecting Kentucky's Julius Randle back in the 2014 draft.
By the end of the Celtics postseason run to the Eastern Conference final their roster was inflexible and lacked a sufficient jolt off the bench. While most of the creation and offense ran primarily through the Jayson Tatum and Jaylen Brown, Walker in his compromised state was still the head of the snake and the Heat targeted him heavily. The Celtics had just three reliable shooters, with Gordon Hayward being out with an ankle injury. Perhaps Hayes could be that needed fourth consistent shooter, or could be the experimental player off the bench that can discover weaknesses in the opposing teams defensive scheme.
Hayes is a solid athlete and excels in leading the pick-and-role. He has serious two-way potential if his effort can lead to better play on the defensive end. On offense he is incredibly patient and fluid, finishing at a crisp 61% on attempts around the basket and 40% on attempts taken from deep at the top of the arc.
Hayes ranks in the 77th percentile in points per-dribble jump shot in the half court (0.99) -- a mouthful, I know -- which means he has a mean pull-up game and defenders are forced to respect his ability to hit from long distance.
While his catch and shoot skills leave something to be desired, Hayes will likely work these wrinkles out as nothing seems fundamentally broken.
Sam Vecenie of The Athletic heralded Hayes court vision as "absolutely off the charts" which is a major plus for someone his age.
Here are some more interesting stats on Hayes during his last season in Germany:
All these stats mean Hayes is projected to go high in the draft. I'm sure the Celtics like him and it'll cost them a pretty penny to trade up in the draft for him. As always, the teams future is very fluid and a potential drastic overhaul could be in order as complex contract situations rear their ugly head. Even though Kemba Walker is great scorer, drafting what could be his successor in three years isn't a bad idea.