Rumors: Would Celtics benefit from a trade for Devin Booker? 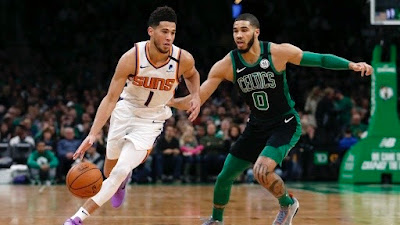 On this week's episode of 'how about trading for player X?’ The Celtics could make a splash before the upcoming season by pairing another young All-Star with Jayson Tatum.
With rumblings that guard Devin Booker might want out from the Phoenix Suns, here's a potential blockbuster trade package that NBAAnalysis.net came up with that could be highly unlikely but worth taking a look at:
Celtics get: Devin Booker.
Suns get: Jaylen Brown, Marcus Smart, Romeo Langford, No. 14 overall pick in this year's draft and a 2022 first-round pick.
The 24-year old guard, who signed a $158.2 million, five-year deal in Phoenix last summer, put up 26.6 points and 6.5 assists per-game this past season.
While it's hard to picture the Suns parting with their franchise player after only five seasons, Booker would get a chance to play for a championship in a big market. But the price for one of the NBA's prolific scorers is a steep one for the Celtics, who would lose two of the league's top defenders in Brown and Smart, while Langford is a prospect Danny Ainge still highly believes in.
Boston has three first round picks this year and trading away one would benefit them, while trying to move up in the next week's draft by using the other two picks to possibly add a big man.
Though Suns' fans would be unhappy at first, they could get use to the idea of Brown's potential being an upside after scoring 20.3 points on 48.1 percent shooting from the field and 38.2 percent from behind the arc last season. Phoenix would have the No. 10 and No. 14 picks in the 2020 draft, with the opportunity to add more young talent to surround Deandre Ayton and Mikal Bridges.
The Celtics on the other hand would have improved their roster and opened up spots to sign a free agent or use their two leftover first rounders to strengthen their bench without the overcrowded factor being an issue.
Either way, the Celtics don't have to make this move, but it would certainly move the needle on the rector scale if both teams are looking to shake things up in an already strange offseason.