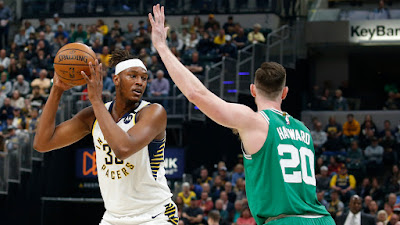 The NBA offseason is in full swing and while players around the league are already running pick-up games, a certain big man has caught the attention of Celtics fans over the weekend.
Myles Turner of the Indiana Pacers posted a video Friday to his Instagram story of him working out with Celtics centers Tacko Fall and Grant Williams.
Turner, who has been the subject of being a possible trade target for Boston, provided a sneak peek of an upgrade at the five for Danny Ainge. The 24-year-old fits the model of a modern day big that can run the floor, shoot the 3-ball and protect the rim.
While the Pacers have reportedly shown interest in Gordon Hayward, it doesn't mean they're ready to part ways with Turner just yet, but stranger things have happened.
Despite the NBPA approving a 72-game season to tip-off on December 22, there's still a collective bargaining agreement that has yet to be finalized -- meaning no trades can be made even with the draft approaching next week.
Hayward has a player option worth $34.2 million for the upcoming season, but no deadline has been set for the Celtics forward to either pick up the option or become a free agent.
Whether there's something to this recent Turner workout with possible future Celtics teammates or not, you can enjoy the video below.