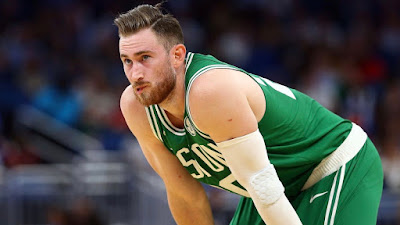 Gordon Hayward has officially made his decision and will opt out of his $34.2 million player option with the Celtics and become an unrestricted free agent.
According to Shams Charania of The Athletic -- who was first to report the decision -- Hayward will forgo his final year in Boston and head into free agency.

Celtics’ Gordon Hayward has opted out of his $34M deal for the 2020-21 season and will become a free agent, sources tell @TheAthleticNBA @Stadium.


While Hayward is coming off his best campaign in three years with the Celtics averaging 17.5 points, 6.7 rebounds and 4.1 assists per game as a full-time starter, many believed he wouldn't walk away from being one of the 15 highest paid player in the NBA this upcoming season.
However, despite Hayward's history of injury while in Boston, he could still remain with the Celtics. Danny Ainge could re-sign the veteran forward to a long-term deal that both parties agree with, especially how the salary cap could be effected the next couple of seasons due to covid.
The Celtics can still offer Hayward the most money come 6 PM EST on Friday when teams are allowed to sign free agents.
Hayward could also have his sights set on taking his talents elsewhere and the Celtics can still put together a sign and trade package, instead of watching the former All-Star walk away for nothing. One team that has been rumored to want Hayward's services is the Indiana Pacers, who have reportedly offered Myles Turner and Doug McDermott in return.
In the event that Hayward does walk like Al Horford did last summer, the Atlanta Hawks and New York Knicks seem to be interested in the 10-year swingman as well
After delaying his player option deadline from Tuesday to Thursday this week, Hayward reportedly "doesn't even know right now," what's next, per leagues sources that spoke to Mark Murphy of The Boston Herald.
So the waiting game continues for Celtics fans and those covering the situation.