Celtics select Aaron Nesmith with the No. 14 overall pick in the 2020 NBA Draft 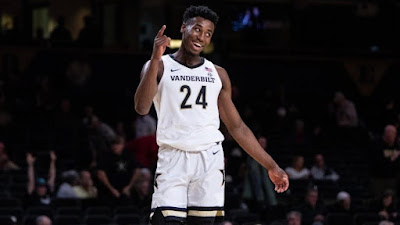 The Celtics selected 6-foot-6 forward Aaron Nesmith with the 14th overall pick in Wednesday night's NBA Draft.
The Vanderbilt alum joins a Boston roster that's full of young exciting wings in All-Star Jayson Tatum and Jaylen Brown, who are the team's future cornerstones. While the jury is still out on what will happen with Gordon Hayward's player option, Nesmith could earn plenty of playing time with his shooting, especially with Romeo Langford -- last year's No. 14 pick -- starting the upcoming 2020-21 season on the injured list.

According to ESPN's college basketball analyst Jay Bilas, Nesmith's strongest attribute is his ability to shoot the ball at a high level, despite playing only 14 games last season due to a right foot injury.

"Best shooter in the draft," Bilas said following the pick. "He averaged 23 points a game last year before he was injured. And there's nobody better [at] catch-and-shoot in this draft, nobody better shooting off of screens. Shooting off of screens, he's got almost 1.4 points per possession in jump shots off of screens. That is ridiculous.
"He's long-armed, you can see his improvement from last year to this year," Bilas added. "And remember, he missed a bunch of games last year because of that foot injury that he had. But his shooting numbers are just absurd."

Bilas did add a side note on where he believes Nesmith could stride to improve on now that he's been drafted to one of the league's best defensive teams in the Celtics.

"I think he can become a much better defender and put the ball on the deck a little bit more, but with that 6-foot-10 wingspan, he can rise up and shoot over anybody," Bilas concluded.

Celtics president of basketball operations Danny Ainge said the team's goal was to add shooting in this draft and called him "a mature player with great size." Ainge later went on to say "(Nesmith) probably shoots it better than most of the guys we have right now," before laughing and saying "Jayson Tatum might have something to say about that."
So what did the rookie forward say that he brings to the table after being officially drafted by Boston at No. 14?

"Absolute sniper. A guy who's going to make life easier for the creators of the offense like Jayson Tatum, Jaylen Brown, Kemba Walker," Nesmith said about what he can bring to the Celtics. "A guy that's always going to be there, work hard, and earn his stripes. Do it on both sides of the floor. I want to be great. I want to be the best player I can be, so that includes defense. I'm going to give my all and the best effort I have to that side of the floor and with my size, length, and athleticism, be able to guard multiple positions."

While Celtics were 13th in the league in 3-point field goal percentage at 36.4% and 12th in 3-pointers made at 12.6 per contest, Nesmith comes in hitting 3's at a high clip of 52% from beyond the arc on 8.2 attempts per game at Vanderbilt.