Report: NBA to have 72-game regular season start before Christmas 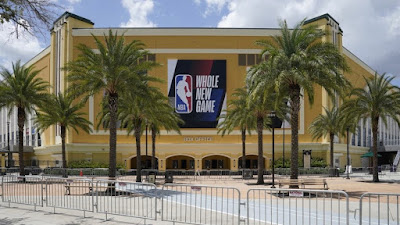 The NBA is reportedly looking to start the 2020-21 season prior to Christmas Day, scrapping their original plans to delay tip-off with the hope of fans possibly returning to arenas.
According to ESPN, the league is considering many changes for the upcoming campaign which include a 72-game regular season, a play-in tournament and also no All-Star Weekend in Indianapolis. Players will most likely have a two-week break instead midway through the year.

The NBA is planning to continue discussions with NBPA on 2020-2021 start plans that would include an opening night in the days prior to Christmas, 70-to-72 regular season games and a play-in tournament, sources tell ESPN. https://t.co/aTobRpe9tZ

The NBA spoke with the league's board of governors on Friday afternoon and the league will have to negotiate with the National Basketball Players Association (NBPA) to come up with an official plan, sources said.
The condensing from a typical 82-game season, gives time to fit a play-in tournament for both the Eastern and Western conference -- allowing the NBA to complete the playoffs and Finals before the start of the Summer Olympics in Japan.
ESPN and TNT will also be able to broadcast their usual Christmas Day games, without affecting the league and TV partnership. Despite a successful "bubble environment" at Disney World and the players supporting a season to start just before Christmas, the reality of the pandemic still making waves across the country will determine travel and game schedules similar to Major League Baseball and remaining in a city longer than a day or two.
With the draft scheduled for Nov. 18 and free agency shortly after that, training camp would commence around Thanksgiving if this timeline holds for a pre-Christmas start to the 2020-21 season. But without a bubble, the risks of positive coronavirus tests will be greater after zero tested positive during the three-plus month stay in Orlando.
The NBA and NBPA have agreed that Oct. 30 will be the deadline to decide on a plan and make the necessary changes to the collective bargaining agreement for the upcoming 2020-21 campaign -- marking it about eight weeks between an official agreement and the possible start of next season.
Due to the loss of revenue with no fans in attendance, which Adam Silver says is about 40-percent of the league's total revenue, the NBA and NBPA will make financial allowances in salary caps, luxury-tax threshold and player escrows.
While the pandemic has impacted the league greatly already, the NBA and NBPA are working on resetting the 2020-21 salary-cap and luxury-tax figures based on financial projections for next year. Teams, agents and players can't wait for an agreement to be reached for a better idea of how much money there will be available to spend in a shortened offseason.