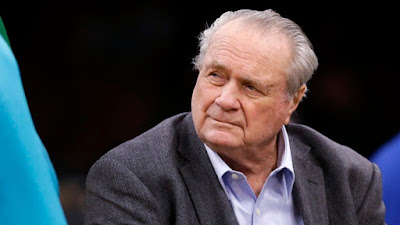 Basketball Hall-of-Fame and Celtics legend Tommy Heinsohn has died at the age of 86 years-old.
Heinsohn, who has been associated with the Celtics for over the past six decades as a player, coach and TV broadcaster, passed away some time on Tuesday, according to The Boston Globe.
The six-time NBA All-Star played nine seasons with the Celtics and won eight championships from 1956-1965, before becoming the franchise's head coach in 1969 until 1978 -- winning Coach of the Year honors in 1973, and two titles in 1974 and 1976.
He is only the fourth person to be inducted into the Naismith Basketball Hall-of-Fame as both a player (1985) and coach (2105), helping the Celtics win a total of 10 championships.
Heinsohn then became a TV broadcaster, teaming up with Mike Gorman in 1981 as a Celtics commentator and also joining CBS' NBA playoff and Finals coverage between 1984 to 1987. For 39 years, "Mike and Tommy" were the voice of the Celtics and the narrators that generations identified with when watching their green team night in and night out.
While Gorman provided play-by-play, Henisohn was the color analyst that immediate became a fan favorite with his brutal honesty and catch phrases, which gained attention around the basketball world.
It wouldn't be Heinsohn called game without hearing "I-LOVE-WALTAH!" in the mid 90's when it came to Celtics forward Walter McCarty or "The Little Guy!" in reference to guard Isaiah Thomas just a few years ago. But it was later in his broadcast career when awarding "Tommy Points" became the staple of every game from the mid 2000's to the present day.
The "Tommy Award" was given out nightly to who Heinsohn believed put in the most effort on both ends of the floor, but wasn't necessarily the game's best player.
Gorman released a statement via his Twitter account Tuesday afternoon.

"Roughly 2,800 times I sat down with Tommy to broadcast a game. Every time it was special," Gorman wrote. "HOF player… HOF coach… HOF partner. Celtics Nations has lost its finest voice. Rest In Peace, my friend. It has been a privilege of my professional life to be the Mike in Mike & Tommy"

Heinsohn cemented a legacy as an NBA player, coach and broadcaster that will more than likely never be duplicated. The Celtics also released a statement in honor of No. 15, which hangs in the TD Garden rafters.

"We take this time to celebrate Tommy Heinsohn's life and legacy, and to share in the sorrow of his passing with his family, friends, and fans," it read. "As long as there are the Boston Celtics, Tommy's spirit will remain alive."

Our prayers and condolences are with the Heinsohn family, friends and the Celtics organization, may he rest in peace.