Is Gordon Hayward done in Boston? 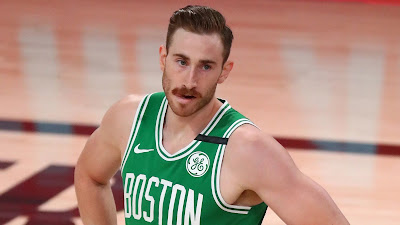 Are the Celtics and Gordon Hayward counting down the days before they are set to go their separate ways?
With the Nov. 18 NBA Draft quickly approaching and Hayward's decision on a $34.2 player option still looming, Celtics president of basketball operations Danny Ainge will continue to wait before considering any offseason moves.
While "Trader Danny" is reportedly looking to trade the Celtics three first round picks in hopes of moving up in this week's draft, Hayward could also be on the move, especially if the veteran forward opts-in to the final year of his current contract.
Celtics insider John Karalis of MassLive, made an appearance on the latest edition of the Causeway Street Podcast and believes that Boston has to maximize the best return, such as roles players off the bench, if in fact the relationship between Hayward and the organization has come to an end.

"When I'm looking for a trade for Gordon Hayward, I'm not looking for a one-for-one, Hayward for another guy type of deal," Karalis said. "If the Celtics have to move Gordon Hayward, I'm looking at it as, well, he doesn't want to stay long-term, they get the sense that he wants out, you got to get something for him, and he's, to me, is the exact type of player that you can flip for a couple of role players to fill out the bench."

Karalis was asked to "take an estimated guess" on what he thought happens with Hayward, being questioned "will he opt-in, or does he opt-out and sign a long-term deal with the Celtics? What are you feeling?"

"I'm just trying to read the room, a little bit, and there's been enough smoke where I feel like he may not be long for Boston," Karalis said. "For whatever reason, I’m not sure that he's looking to stay here long-term. I think if that's the case, he'll probably opt-in and then get traded – that's probably the best-case scenario for him. You go to Danny Ainge and you say 'look, if you can move me preferably to these three cities, or wherever, that would be my preference. I'm going to opt-in and then I'm going to explore my options next year and that's going to be the course of action that I take."

However this may play out, both the Celtics and Hayward are seeking long-term insurance, but it just may end up not being with one another.
Listen to Karalis full interview below: