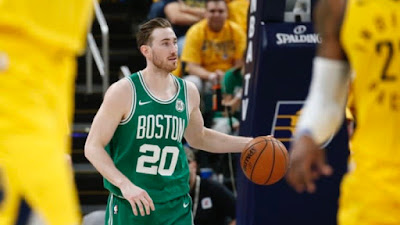 The offseason rumor-mill continues to spin for the Celtics and its main focus is centered around forward Gordon Hayward.
According to Ian Begley of SportsNet New York, the Indiana Pacers have interest in possibly trading for Hayward. However, the report also states that it still remains unknown if Boston is looking to move the veteran forward at all and what they would want in return.
Myles Turner has mainly been the player that the Pacers have received several offers from in the past couple of seasons, which Begley informs us that Indiana was never close to moving on from their big man. But, it also serves as a reminder that the asking price for Turner could be a steep one.

"Teams have kept an eye on Indiana as a possible trading partner since last offseason," Begley writes. "Last summer, several teams inquired with the Pacers about Myles Turner trades before and after the NBA Draft and came away with the impression that it would take a significant offer to land him.
"This offseason, the intrigue around the Pacers will continue because the team has $58 million in 2021-22 salary committed to Turner, Domantas Sabonis and Malcolm Brogdon."

Victor Oladipo, who is another name that was floating around as soon as the NBA Finals ended, also has a questionable future in Indiana for the time being.

"Opposing teams are keeping an eye on the situation in Indy because the club will likely have to commit significant money to Victor Oladipo in the summer of 2021 if it wants to keep him," Begley writes. "The Pacers will be able to exceed the cap to sign Oladipo. But it would take a significant financial commitment from Indy to keep the foursome of Oladipo, Sabonis, Brogdon and Turner intact.
ESPN reported that the Pacers and Oladipo had talks about an extension before the season but concluded it was best to table the talks."

Begley sites that a source close to the Pacers wanted to give Oladipo a long-term contract to keep the All-Star for at least the next four seasons.

"Per SNY sources, at one point in the extension talk between the club and Oladipo, the idea of a four-year extension for around $80 million was broached," Begley writes. "Discussions about an extension didn’t progress much from there."

Hayward has a decision to make on a player option for next season worth $34.2 million or become a free agent before the Celtics can proceed with any sort of trade talks. The former All-Star could restructure a new deal to remain in Boston as well.
Either way, if the Pacers are very much willing to play ball and offer Turner as part of a package for Hayward, Danny Ainge would have to seriously consider listening.