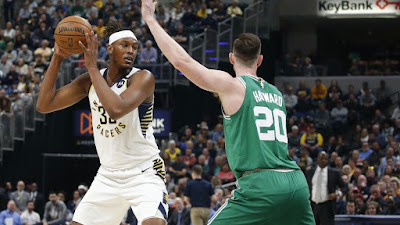 For all intent and purposes, Gordon Hayward wanted to play for the Indiana Pacers and a sign-and-trade was in works before the Charlotte Hornets swooped in and offered the Celtics free agent a four-year, $120 million deal.
According to J. Michael of the Indianapolis Star, not only did the Pacers put Myles Turner on the table, but a first-found pick was also offered to Danny Ainge in a potential sign-and-trade for Hayward.

"The Indiana Pacers offered the Boston Celtics Myles Turner, a first-round pick and a rotation player for Gordon Hayward last week, a source with knowledge of the negotiations told IndyStar."

Though it seems like Ainge rejected this trade offer for the 24-year-old big man, who was under contract for the next next three seasons at $18 million per-year, two other questions remain such as who was this rotation player? Possibly Doug McDermott (one year, $7.3 million remaining), the one-dimensional 3-point shooter off the bench or Jeremy Lamb (two years, $21 million remaining) who's overpaid and still recovering from a torn ACL?
Not to mention, was there any protection on the proposed first-rounder from the Pacers that wasn't appealing to Ainge?
While letting Hayward walk for nothing wouldn't exactly open up adequate cap space to replace the one-time All-Star, the Celtics did reportedly offer a four-year, $100 million contract to retain him. But the Pacers also made a similar offer to Hayward, while trying to execute a sign-and-trade in the process.
Perhaps Ainge played hardball with Indiana in a last attempt to re-sign Hayward before the Hornets foiled both the Celtics and Pacers' plan to convince veteran forward.
Either way, it appears Boston would have put Turner right on the trading block if they did acquire the Pacers center in a sign-and-trade package for Hayward, per ESPN's Zach Lowe.

"Talking to people and reading the tea leaves as best I could, I think it just comes down to the Celtics didn't want Myles Turner," Lowe said on his Lowe Post Podcast. "I did hear from some teams around the league that the Celtics have done some preliminary research on what Myles Turner's trade value would have been to them had they acquired him either in this deal or in a separate deal, and obviously didn't like what they saw."

Apparently Turner's 12.1 points, 6.6 rebounds and 2.1 blocks per-game this past season did not suffice when it came to what the Celtics were seeking after losing to the Miami Heat 4-2 in the Eastern Conference Finals.
Ultimately, Ainge sought out 2016 NBA champion and free agent center Tristan Thompson instead on a two-year, $19 million contract, while still trying to reportedly execute a sign-and-trade with the Hornets now for Hayward.
Whether the Celtics' overplayed their hand or simply made a decision -- however you want to view it -- puts them over the top in the East or not, one thing is obviously clear; Ainge always has a plan B.