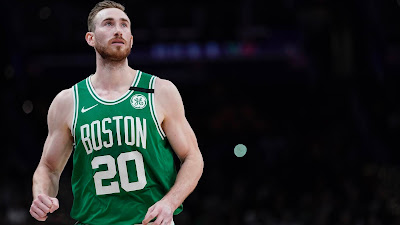 Gordon Hayward and the Celtics have reportedly agreed to push back the veteran forward's player option to Thursday Nov. 19 at 5 p.m. ET.
According to ESPN, Hayward, who had until Tuesday at 5 p.m. to make a decision to exercise his option or become a free agent, will now get to decide his future after Wednesday's NBA Draft.


While Hayward remains a pending free agent, he can't be traded, especially if he opts out. For months there's been speculation surrounding the Celtics forward's future, including possibly seeking a long-term deal elsewhere or being traded if he opts-in.
The Indiana Pacers have been rumored to be interested in Hayward for weeks and Kevin O'Conner of The Ringer reports that the New York Knicks are another team that could make a play for the former All-Star if he should become available.
It's still unclear if Hayward wants to remain with the Celtics or he wants out of Boston, like it was reported earlier this month.
By delaying the deadline, there's no guarantee that Hayward will opt in, but it does present a few scenarios for Danny Ainge. A new contract with the Celtics could be negotiated, if he opts out or a trade partner is a possibility in a sign-and-trade as well. If Hayward opts in, he could either play out the 2020-21 campaign to up his value in a more stable offseason next summer or a trade could also be in place at some point during the upcoming year.
Though highly-unlikely at this point but still could happen is Hayward opts out and walks into free agency and the Celtics get nothing in return.
It should be interesting between now and Thursday, as the Celtics offseason gets underway.