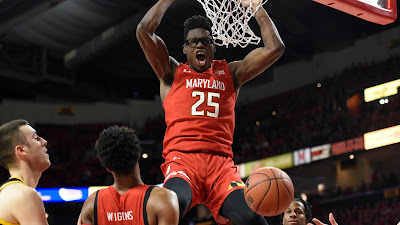 When you're picking at No. 14 like the Celtics are, the point of drafting is primarily for upside. Athleticism is usually what draws teams slotted in the mediocre range of an NBA Draft.
Danny Ainge has found success in selecting intriguing prospects in this exact situation the last two years, as Robert Williams III and Romeo Langford are promising and yet still developing.
While Jalen Smith is a big forward (a position the Celtics are stacked in at the moment) selecting him means they'll have to be some transactions made to free up playing time for the rookie out of Maryland -- but that is a discussion for another time.
What are the Celtics getting if they make Smith their selection?
With his 7-foot-2 wingspan, Smith would be the second longest on roster that can shift between the big forward and center spots. His below average wingspan would typically ween me from wanting him, but we've seen Boston do fine with players' wingspans that don't leap off the page. Jaylen Brown, Marcus Smart, and Jayson Tatum posses shorter wingspans than Smith and have become irreplaceable stars. While Smith can move well east to west, his inability to shift his hips makes him a possible liability in space. Add to that his thin legs and a need to add more weight in his lower body Smith, while intriguing, comes across as limited.
Smith has good bounce off two feet, but his dribbling needs polishing and his shooting motion could be quicker. While muscle is considered a back burner priority in the modern NBA, scouts agree Smith could use an extra fifteen-pounds of muscle.
In his two seasons at the collegiate level Smith hit from deep at a decent clip, sitting comfortably at 36.8 percent. His free throw percentage from his freshman and sophomore campaigns leapt from 65% to 75%. If worked with, Smith can become a critical stretch big similar to Grant Williams. Like Grant, Smith exhibits a cerebral approach to the X's and O's, often avoiding mistakes prospects his age tend to make.
Very rarely you find the quality of consistency in a prospect slated to be taken in the middle of the draft. Smith runs the floor well and can finish off the break, his bread and butter being baby hooks and an ability to create near the basket shots with an array of polished interior moves. Shooting 73% near the rim on 103 attempts and scoring in the 96th percentile, according to his synergy profile.
At 6-foot-10, Smith grades out to be a quality specialist off the bench and if the Celtics work with him, he can become a more athletic Grant Williams or a higher IQ Robert Williams.