Isaiah Thomas says he's ready for an NBA return, 'I feel like I'm back' 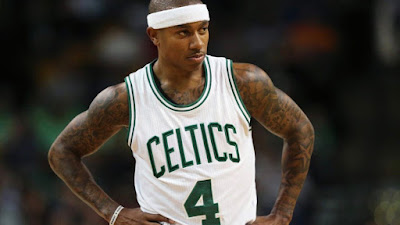 It was less than a month ago that free agent Isaiah Thomas was invited by former Wizards teammate John Wall to work out and run pick up in Los Angeles.
What the ex-Celtics star didn't expect was that he'd play some of his best scrimmages in a really long time, as Thomas impressed everyone in attendance including the Brooklyn Nets' Kevin Durant and Kyrie Irving during "some high-level pickup games."
According to Thomas, who recently spoke to Adam Himmelsbach of The Boston Globe, he has a full range of motion for the first time in over three years.

"Those guys were like, 'Damn, welcome back. You really look like yourself,' "Thomas recalled. "That only gave me more confidence to be able to play the game again. I mean, I was blowing by people. I have't blown by anybody since I had a Celtics uniform on. When I was able to blow by MVP-caliber players, which told me my burst and power and speed are there. I really feel like I’m back."

It was practically some of the first five-on-five live action Thomas had played since his right hip procedure back in May, that he claims "was just bone on bone" prior to the surgery.
Following stints with the Cleveland Cavaliers, Los Angeles Lakers, Denver Nuggets and Washington Wizards, where Thomas was never physically at the same level as when he was in Boston, believed there was no choice but to say anything to not lose an opportunity to keep playing in the NBA.

"I had to say that," Thomas said. "If I didn't say that, I probably wouldn't have gotten the chances I did with Denver and the Wizards. People who were around me every day or had seen me before I got injured obviously knew I wasn't myself. I was definitely feeling better but it wasn't good enough, and I think people saw that. I knew, but I had to make people believe I was OK when I really wasn't. But, this time around, I'm feeling really good, and people can see it for themselves."

Now after the first few days of free agency have come and gone with no offers from any rosters yet, Thomas continues to wait his chance to show he's far from done. It was back in February when he was waived from the Clippers after being dealt to Los Angeles by the Wizards.
Thomas played 40 games this past season in Washington D.C. and averaged 12.2 points, 3.7 assists, while shooting 41.3% from 3 before before being traded and cut.

"I was really playing on one leg against the best players in the world," he said. "That's difficult for anybody. I just had to adjust my game to where I was able to make an impact in any way possible. I relied on my jump shot more than I usually do, and my strength has always been getting in the paint and finishing around the rim. Now I'm able to move, get to the hoop, and put pressure on the defense."

Still, it appears that the 31-year-old during these pick-ups looked close to his Celtics days, where he played two-and-a-half seasons. It was the 2016-17 campaign that Thomas averaged 28.9 points while getting selected to the All-NBA second team and finished fifth in league MVP voting.
Jamal Crawford, a respected league veteran, who also ran pick-up with Thomas in Seattle and alongside Washington state native Zach LaVine, is convinced the former two-time All-Star's explosiveness is back.

"This is the most healthy I've seen him look since Boston," said Crawford of Thomas. "He's healthy, he's spry, and he has that pop in his step. And he can play for long stretches now. It's not like, 'Man, I played yesterday, I can't play today.' It's not that. Now it's, 'No, let's go. Let's go longer.' You can tell he's a new person."

For now Thomas has to play the waiting game and hope an NBA team gives him a call sooner rather than later, even with all the endorsements from former and current star players.

Until then, Thomas remains eager to prove that it's not all talk at this point and it's time to walk the walk.