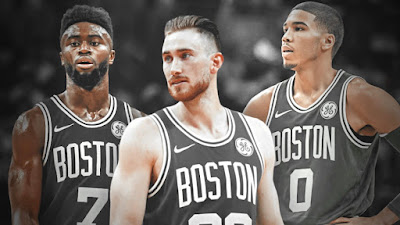 As discussed, in Part I of the "Potential Avenues for the Celtics after the Gordon Hayward opted out," Danny Ainge has many variables to juggle going forward with three distinct options for their veteran free agent.
In this piece we investigate some possibilities if the 'doomsday scenario' of Hayward leaving for nothing does occur.
Let's say it happens, the worst outcome comes to fruition and Gordon Hayward's three year stay as a Celtic ends with nothing but a cloud of smoke. What then? The answer is as simple as it is obvious,  Ainge immediately becomes the topic of conversation. He and his front office team would be tasked with filling one of the most efficient stat lines in the NBA from last season. While Boston proved they can live without Hayward (see the Toronto Raptors second round series just a couple months ago), Ainge would want to do his best to mitigate the loss in any way possible.
How can Ainge go about doing this? The possible answers lie below.
Part II: Doomsday Scenario -
1. Player Development
Boston will start the 2020-21 season with two of the NBA's brightest young stars in Jayson Tatum and Jaylon Brown. To put it simple, the future is in good hands. With Hayward gone, the load would shift fully to the two young superstars and they would be tasked with picking up the slack. The Celtics would also push more of the offensive load to Kemba Walker. Walker was signed as a veteran scorer who would facilitate and compliment this young duo and his role would be as important as ever. Assuming he is healthy, he would be asked to regain his all-star form and be a clear top three option for the Celtics night in and out.
Brad Stevens and the Celtics would also look for an evolution of Marcus Smart's game as he would be the odds-on favorite to take up the starting role left by Hayward. Smart would likely see the largest role increase (offensively) and his energy and defense would also be a huge need for going forward.
Others that would be tasked with maturing quickly would include Robert Williams III, Grant Williams, as well as rookie Aaron Nesmith. Boston would need this trio among several others to take steps to play major roles for the 2020-21 team. Grant Williams would be the most likely to gain a consistent role with his combination of experience and skills but Nesmith would be the most logical minute getter for his positional similarities to Hayward.
2. Free Agency -
While cap space will still be non-existent, Boston will still have a few exceptions that will give them a shot at adding some talent to fill the hole Hayward would be leaving behind. Namely, the full Mid-Level Exception of approximately $9.2 million as well as the Bi-Annual Exception of around $3.6 million. These two exceptions should allow Ainge some level of flexibility to beef up his young bench with some proven veteran options.
Who would he be looking to add, here are some options:
3. Trade -
If Ainge can add some depth via free agency, don't count out the possibility of Boston sticking its toe in the trade pool as well. A by-product of the Enes Kanter opt-in is a very nice $5 million contract that is tradable and appealing to teams looking to move unwanted players.
Below is a couple options Trader Danny may consider:

Wood had a breakout season in Detroit and would push to start at the center spot for Boston. He would also be an interesting player in a sense that the Celtics will need to find auxiliary scoring in Haywards departure. Wood could easily see himself ascend to being the Celtics fourth scoring option (keep in mind, that role was good for 17+ points a night last year).

The move would add a veteran forward to Boston' s bench mix. Tucker is now 35 years old and would be more of a short term rental but it would add a forward who can defend at a high level and knock it down from outside as a corner three ball option.