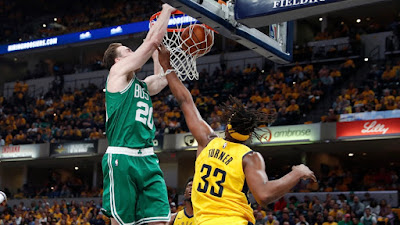 The Charlotte Hornets made major headlines over the weekend during the start of NBA free agency when they came to terms with Gordon Hayward on a four-year, $120 million contract.
Considering Hayward's history of injuries over the last three years in Boston, the deal with the Hornets seemed a bit high and out of left field for most analysts around the league.
While Michael Jordan has had no issues "overpaying" free agents in the past, the Celtics and Indiana Pacers each reportedly offered Hayward at least $100 over four years.

Hayward, who opted-out Thursday of a $34.2 million player option to play the fourth and final year of his $128 million contract with the Celtics, was rumored to want a return home to Indiana on a possible sign-and-trade before the Hornets swooped in to offer roughly $30 million per season.
Though it seems like Boston may have lost Hayward for nothing in return, a sign-and-trade now with the Hornets is still being discussed as Charlotte apparently has to still clear salary to make room for this new contract.
Despite Hayward's time in Boston being plagued with injuries, it appears the Celtics were willing to still take a risk with the 30-year old veteran forward. Now not only will the former All-Star see more money than originally planned, he'll also have a bigger role in Charlotte.