Report: Hawks are in talks to acquire Gordon Hayward 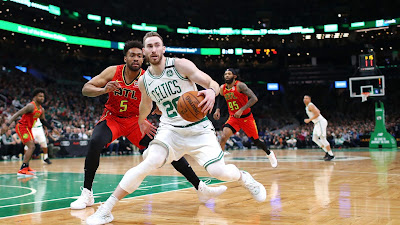 It was quite the Tuesday afternoon if you were keeping an eye on any and all Gordon Hayward news, rumors and opinions on social media.
With a little less than two hours remaining for Hayward to make a decision on exercising his $34.2 million player option or become a free agent, it was confirmed via ESPN, that the Celtics and the nine year veteran agreed to push the deadline to Thursday at 5 PM ET.
While that guarantees Hayward will not be traded before Wednesday's NBA Draft, it would appear that the Celtics forward could still be on the move.
According to a report that surfaced just a couple of hours later by Chris Haynes of Yahoo! Sports, the Atlanta Hawks are in play to possibly acquire Hayward, per league sources.
While the Hawks reportedly have about $44 million in cap space -- the most than any other team in this NBA offseason -- they can sign Hayward outright to a long-term deal if he decides to opt out of the last year of his contract with the Celtics.
Atlanta is in search of a veteran playmaker to pair with their All-Star Trae Young. The Hawks are also set to make an offer to unrestricted free agent Rajon Rondo, who declined a $2.7 million player option with the champion Los Angeles Lakers.

Rajon Rondo is expected to receive a significant offer from the Atlanta Hawks ($15 million for two years guaranteed) but according to a source, Rondo remains focused on potentially joining the Clippers. He could possibly get the mid-level from LAC.


After three years in Boston, Hayward is coming off his best season with averages of 17.5 points on 50% shooting from the field and 38% from 3-point range while pulling down 6.7 rebounds and handing out 4.1 assists.
It's unclear if the move to extend Hayward's player option deadline with the Celtics is to restructure the 10-year veteran's contract or if a sign-and-trade is being discussed before moving forward.
NBA free agency is scheduled to begin on November 20.