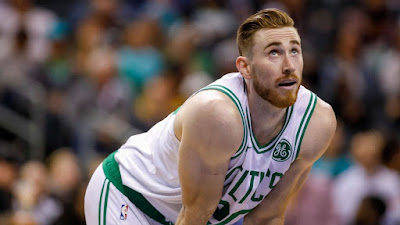 As the Celtics continue to shop their three first round draft picks before this week's NBA Draft, one decision will be made by early Tuesday evening.
Gordon Hayward has until 5 p.m. tomorrow to exercise his $34.2 million player-option or opt out to become a free agent and take his talents elsewhere.
Mark Murphy of the Boston Herald, reports that Hayward continues to still mull over the decision with less than 24 hours remaining.

"According to two league sources, the playmaking power forward hadn't made up his mind on picking up the option as of Monday night, one expressing the belief that Hayward would ultimately opt in and remain with the Celtics."

While over the past couple of months the rumor mill would suggest that Hayward could be seeking a long-term deal with another team, just as former Celtic teammate Al Horford, a sign-and-trade is also a possibility.

Gordon Hayward has not decided on his $34.1 M option yet, and has until 5 p.m. tomorrow to exercise it. The Celtics have myriad options of their own to still consider. League source: "All I can say is that a lot of people want him."


Celtics president of basketball operations Danny Ainge will have a clearer understanding of what will be the his next offseason move come Tuesday night.