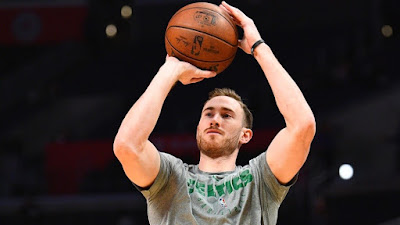 With Thursday's news Gordon Hayward was opting out of his player option, the Celtics have been left scrambling to see what they can recoup for the one-time superstar.
Boston is now left in a mad dash to find replacement parts to fill in the 17-plus points per-game hole left in their line-up along with the versatile skill set Hayward offered. The energy now shifts to what can the Celtics do and where does the Danny Ainge and the brain-trust turn to now to help build its 2020-2021 roster to contend for a title?
I breakdown two potential scenarios when it comes to the path Hayward could choose to take and options for the Celtics to consider if they lose the former All-Star to free agency for nothing.
Part I - The Hayward Variable:
1. The Return?
Even with Hayward deciding to opt-out, the possibility of a return is still viable. Despite the expectation and rumors lead most to believe he wants and will push for a fresh start elsewhere, his return isn't impossible. Hayward will be looking for a new long-term deal that allows an insurance policy on his body that has struggled to stay healthy the last three years.
While it seems unlikely, if Boston were to offer up a three year $90 million dollar contract, would Hayward thumb his nose at it to go to a lesser club?
2. Signing to a new team
Hayward's opt-out did give him a major say in what happens going forward. His entrance into the market put the Celtics at his mercy and leaving for nothing is certainly possible. The only catch? The teams with money to offer him ($20 million or more in cap space) are not very good. The two most likely options would be the New York Knicks or the Atlanta Hawks. Though New York is starving for a super-star and would welcome a talent like Hayward, would he really want to go to the most mismanaged franchise in the sport? Possible, but not likely.
Atlanta seems a more likely option on paper due to some great young players trending the franchise toward playoff basketball in the coming years but does the timeline work for Gordon? He's going to be 31 years old in 2021 and the young Hawks would only just be getting into playoff contention this season. Adding Hayward would help speed things up but would he really want to be a part of a long-term rebuild for a franchise that has struggled to maintain success?
3. Sign and trade
The most likely option of the three, is why Hayward's opt-out gave him the leverage needed to push Boston to make a deal to any team he wants to join. For the Celtics, losing him for nothing to an in-conference opponent would sting more than shipping him off for a lesser return.
The gut feeling many around the NBA have had for weeks is that Hayward is angling for trade back to his native Indiana. This now seems as likely as ever due to Hayward having the leverage gained in his opt-out and being able to directly negotiate with the Pacers. If the two sides find amicable terms, and Boston wants to get a return for the former all-star, this would be the way to do it.
Most likely outcome? Myles Turner and Doug McDermott for Hayward. While Boston loses the only former All-Star in the deal, they gain a starting center in Turner who is only 24 years old and seems to have existing relationships with Celtics players. As well as Doug McDermott, who is a sweet shooting forward that Brad Stevens would love to have at his disposal off the bench.
Now comes the big question, what is really going to happen?
As mentioned, the sign and trade avenue seems most likely for both Gordon Hayward and Boston, but would that work for Indiana? My gut says, yes. In a season that marketing, and revenue streams of players will be vital for NBA franchises, for Indiana to bring in a player of Hayward's caliber and marketability in the Indiana area, it would be an enormous win. The lack of in-arena revenues will have teams thinking about the bottom line in 2020-21 and adding a player like Hayward in a market that would love a local-raise star might be too appealing to pass up.
Find out what options could the Celtics consider seeking following, Hayward's opt-out in Part II.