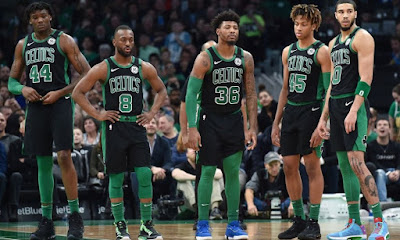 With the Celtics offseason in full swing and the NBA looking to reset the salary cap for the 2020-21 campaign, its time to take a look at the roster's contracts, exceptions and options for next season.

While its most likely there'll be little turnover, below there's a list of the players expected to return, potential free agents and options the Celtics may have to add players.
Keep in mind that the presumed salary cap for the league in 2021 could look similar to that of the 2019-20 season and assuming that it remains that way, Boston's projected team salary could be estimated at $151,116,503.
2020-21 Guaranteed contracts: 9
Guaranteed contracts: $93,353,645
Player Options: 2
Team Options: 1
Non-Guaranteed contracts: 2
Restricted free agents: 3
Dead Money: 2
2020 NBA Draft Picks: 4
Due to the collective bargaining agreement not being set yet, deadlines for Gordon Hayward and Enes Kanter to pick up their player options have been delayed. The new CBA also affects the deadline for the Celtics to pick up Semi Ojeleye's team option, plus make a decision to guarantee Daniel Theis and Javonte Green's contracts.
Also, once the salary cap is set league wide, Boston will have a date to either extend their qualifying offer to Brad Wanamaker to become restricted free agents -- meaning the Celtics can match offers from any other team -- or not extend their qualifying offer and Wanamaker becomes an unrestricted free agent.
On a side note, Two-way players have no impact on the salary cap unless their deals are converted into regular standard contracts.
In short the Celtics have nine guaranteed contracts for next season, including Romeo Langford, Grant Williams, and Robert Williams, who are on rookie deals which have team options for the 2021-22 season. Kemba Walker has one more guaranteed year before a player option for the 2022-23 campaign. Marcus Smart has one more guaranteed year left on his deal after next season, while Brown is beginning the first year of a four-year extension he signed in the summer of 2019.
Jayson Tatum is entering the final year of his current rookie deal and is eligible for an extension up until the first day of the regular season. The Celtics can negotiate a deal with the 22-year old and because he made an All-NBA team, he is eligible for a five-year deal worth up to 30-percent of the salary cap. However, whether Tatum signs and extension or not, this does not change the final year of his rookie contract.
So how much money is available to spend on potential free agents?
If Hayward opts in -- which has been reported that he will -- then the Celtics will be a luxury-tax paying team (roughly a little over $2 million), but could have about $5.7 million on a mid-level exception to offer (assuming they guarantee Theis' contract and hold on to their three draft picks). If Danny Ainge re-signs Hayward on a team friendly deal (up to five years at $100 million) at a base salary of $17.2 million or Hayward walks, the Celtics' MLE bumps up to $9.3 million and possibly an additional bi-annual exception of $3.6 million, but not much more cap space for any other signings.
Since Hayward has been in Boston for three seasons, the Celtics own his 'Bird Right' and they could exceed the salary cap to retain his services if he does decide to opt out and restructure his deal.
Can the Celtics pull off any sort of trades this offseason?
Unless Ainge wants to move any of the core players such as Brown, Smart or even Tatum, then you're looking at matching salary for any potential trade. Since Hayward, Kanter and Theis are eligible for a sign-and-trade, the Celtics would be hard capped at $139 million if they choose to go this route and are unable to spend more than that -- such was the case when they acquired Kemba Walker in a sign-and-trade for Terry Rozier last offseason.
Walker and Hayward both have 15-percent trade kickers and if they're traded then you have to add 15-percent to their salaries and that's the factored into the final equation when it comes to matching salaries. Of course, each player could waive their trade kicker if they chose to.
When it comes to draft picks, they have no real value and can only be used to sweeten any potential trade offer.
As for cutting any player with a guaranteed contract, their salary becomes dead money against the cap, unless the waive-and-stretch provision is used -- which spreads the salary over twice the remaining years and one additional year.
Outside of a blockbuster trade of their top talent and freeing up some money by re-signing Hayward, the Celtics don't have much options or money to spend on a veteran to help the bench. Ainge will have nearly the same roster he had a year ago and that's not necessarily a bad thing going into the upcoming season.