Kevin Garnett rips Glen Taylor, wants nothing to do with T-Wolves owner - including his jersey being retired 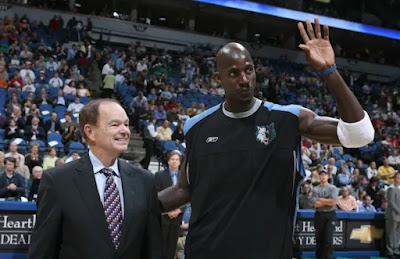 Kevin Garnett is the Timberwolves' best player in franchise history and it's not even close, but owner Glen Taylor wont' get a chance to thank KG for his 14 plus seasons in Minnesota anytime soon.

Garnett, who is heading into the Hall-of-Fame class of 2020, says he has no interest in getting his jersey retired by the first organization that took a chance and drafted him straight out of high school back in 1995. The 15-time All-Star didn't hold back when ripping Timberwolves' owner Taylor, who he has had a fallen out with since retiring following the 2015-16 season.


"Glen knows where I'm at. I'm not entertaining it," Garnett told The Athletic's Shams Charania on the Timberwolves wanting to retire his No. 21 jersey. "First of all, it's not genuine. Two, he's getting pressure from a lot of fans and, I guess, the community there. Glen and I had an understanding before Flip [Saunders] died, that understanding went with Flip."

Garnett, 43, was not happy about the way things ended in the last season and a half in Minnesota, when he waived his 'no trade clause' and was dealt back to the team he spent 12 years with before winning his one and only championship in Boston. The deal between the Nets and Timberwolves at the 2015 NBA trade deadline, meant Garnett was looking towards a future within the team's front office after his playing career was officially over.

Prior to Garnett accepting a trade back to Minnesota, he was promised by the then team president Flip Saunders and Taylor a stake in the team's ownership, plus a say in the front office decision-making process. Garnett even signed a new two-year deal to help the likes of promising young stars in Andrew Wiggins and Karl Anthony Towns. But when Saunders died in 2016 of Hodgkin Lymphoma, Garnett says Taylor went back on their original agreement.


"For that, I won't forgive Glen," Garnett told Charania. "I thought he was a straight-up person, straight-up business man, and when Flip died, everything went with him."

The sudden death of Saunders meant the Timberwolves had to move on with new leadership and hired Tom Thibodeau as head coach and president of basketball operations that offseason -- forcing Garnett to negotiate a tense buyout, which led to his retirement. In 2017 Garnett spoke to the Associated Press about how his career ended in Minnesota and he believes promises were broken.


"My years in Minnesota and in that community, I cherish," Garnett told The Athletic. "At this point, I don't want any dealings with Glen Taylor or Taylor Corp. or anything that has to do with him. I love my Timberwolves, I'll always love my guys, I'll always love the people who f--k with me there. I'll always have a special place for the city of Minneapolis and the state of Minnesota in my heart.

Though the relationship between Garnett and Taylor, who has owned the T-Wolves since 1994, was already somewhat frayed dating back to 2007 when a blockbuster trade sent "The Big Ticket" to the Celtics, it was almost a foregone conclusion that KG was going to retire in Boston. But obviously that changed, as things are not always written in stone.

While the Timberwolves' desire to make things right with Garnett seems like it might never come to fruition, the Celtics already have plans to raise his jersey to the TD Garden rafters at some point next season.

Garnett averaged 17.8 points, 10 rebounds, 3.7 assists per game in 21 seasons with the Timberwolves, Celtics and Nets.