Marcus Smart talks to CNN about testing positive for COVID-19, the importance of self-quarantine 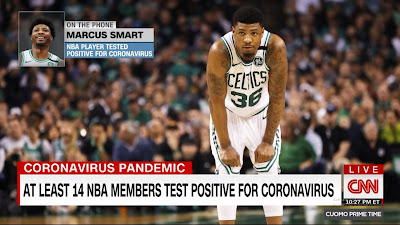 Marcus Smart is one of 14 members of the NBA to test positive for COVID-19, otherwise known as the coronavirus.

The longest tenured Celtic, who is in his sixth season, confirmed on CNN Friday of the news and despite showing no symptoms, Smart stressed the importance of taking this illness serious.


"I found out yesterday evening sometime. And for me, it was just like a surprise, you know, because like I said, I feel fine. I haven't had any symptoms," Smart said. "So for me, like when they told me I had it, I was just like, oh, wow. You know, and it definitely really makes you alert to what's going on. In the situation.

"I've actually been taking isolation -- the quarantine very, very seriously. I've been quarantined for a while now. Ever since we got back from our road trip and decided to get the team tested. I have been quarantined ever since. Doing everything I'm supposed to. Washing my hands. Germ-x. Everything."

We will beat this together by being apart for just a little while! #TogetherApart @CNN @ChrisCuomo https://t.co/Wo7TYkJnrv
— marcus smart (@smart_MS3) March 21, 2020


Smart was asked if he's concerned about testing positive and his overall health, which he made clear that there is no need to worry about in the midst of this pandemic.


"Actually, I'm not -- I'm not that concerned at all," he said. "You know, like I said, I feel fine. No symptoms. And I talked to my doctors and they feel the exact same way with me. And they just told me, you know, you haven't really experienced any symptoms yet. I mean, you already being quarantined. So you should be on that last curve of the ball. And so everybody in my corner feels great on this end. And we just ready to finally get this behind us. And move on, like I said.

"But we're taking the steps to make sure we keep, you know, everybody else safe around me. My loved ones. And just people out in the streets and making sure we keep the contact limitless and just quarantine. That's the biggest key is just really isolating yourself."

The Celtics guard lastly explained that those of his generation, especially, need to understand that even if you're not showing symptoms, it's essential to self-quarantine to prevent the spreading of the virus unknowingly.


"And that's the key. That's the key right there. Because people that contract the virus can be asymptomatic and not show any symptoms is really hard for anyone to know that they have the virus," Smart said. "And being around a group of people, being around friends and family, and, you know, really not isolating yourself, you are a carrier and you become spreading the virus around with not even knowing. And that's the biggest key because you can't tell just by looking at somebody whether they have it or not because they can still look healthy and normal. And still have it and spread it. And then that's where we get the problem where we have now. I advise, especially around my generation, I'm 26. Take it seriously.

Along with Smart, other NBA players that have tested positive of the coronavirus, include Rudy Gobert, Donovan Mitchell, Kevin Durant, Christian Woods, three Nets and two unnamed Lakers players. The Denver Nuggets and Philadelphia 76ers have announced members of their organization who have also tested positive.