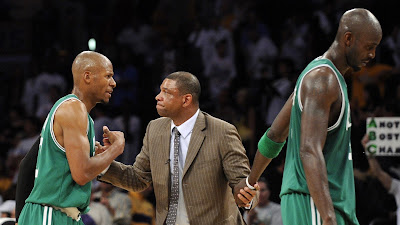 If you're keeping score over the past month or so, Doc Rivers has become the third member of the 2007-08 Celtics championship team to grant an interview with Cedric Maxwell.

Rivers appeared on an episode of The Cedric Maxwell Podcast, which was released on Thursday, to speak about the NBA season possibly resuming since being suspended due to the COVID-19 pandemic and of course the ongoing rift between Hall-of-Famers Kevin Garnett and Ray Allen.

The Celtics "Big-3" of Paul Pierce, Allen and Garnett or even the rest of that championship roster has yet to come together for any type of official reunion. While many members of that 2008 team have reunited on different occasions without Ray Allen, many of his former teammates haven't forgiven him after he chose to play with the rival Miami Heat as a free agent back in the summer of 2012.

While Garnett has gone on record to express why he and Allen haven't spoken, Maxwell has vowed to get those two together again and Rivers feels he has a responsibility to also make it happen.


"We have to, Max. I really view it as my job, I swear," Rivers said to Maxwell. "It's a shame because I get the anger. Ray went to Miami in the middle of what we were doing and I also understood what Ray was doing, honestly.

"Ray was looking at us [and] he was looking at a younger team [Miami]. He was a free agent. You cannot say Ray did the wrong thing, you know. He had already won a title with us. I got it. I wasn't happy about it but now that's over with. We won a title together. This group was so close, that bond. We gotta get over it"

Ray Allen, who also spoke on Maxwell's podcast recently, says he holds no angst towards Garnett.


"I never had any ill-will towards Kevin," Allen said last month. "This is not a two-way argument or debate. This is him. He dug his heels in the sand and he decided I'm not a brother of his anymore and so I said, 'cool.' I moved forward.

"I'm retired, I've moved on and I'm not going to go anywhere I'm not wanted and I do believe that sentiment has been relayed quite often on social media and so many different outlets."

Rivers feels he failed to reunite Allen with the rest of the Big-3 when Paul Pierce got his jersey retired at the TD Garden following a Celtics home game back in 2018.


"I gave up too easy on him [Allen], said Rivers. "I called Ray once and he said he was going to come. I called him another time, we kind of talked and finally I knew he wasn't coming and I just let it go."

Now with Garnett heading into the Hall-of-Fame class of 2020 later this year, Rivers wants to get Allen and the band back together when the Celtics retire KG's number at some point next season.


"Listen, we have a lot of knuckleheads on our team, some stubborn guys; KG, Rondo, Paul," said Rivers. "Paul's kind of come the other way now. So Paul's on the side of bringing Ray back in. Now it's my job.

"I think it's the one thing I have to do. I have to somehow get Ray and Kevin in a room or on the phone. And once they have a talk, you know. They have so much respect for each other. We just gotta do it."

Tony Allen also made an appearance late last month on Maxwell's podcast, as he agrees that a 2008 Celtics reunion that includes Ray is not only well overdue, but it would mend all fences in the eyes of the fans.


"You look at all these other championship teams that come back, reunite and things of that nature," Allen said. "The public eye really want to see you together, really want to see y'all in a picture together if anything. Just to kill all the noise for people like us to just stop even talking about it. I can't wait for one of those boys to have a dinner and it's gon' crack ... I just think we need to do that, make that happen, somebody set that up and nip it in the bud, man."

Despite Maxwell and Rivers' mission to reunite the two former teammates, they know that it won't be an easy task, especially because of their strong personalities.


"Ray [Allen] and Kevin [Garnett] are just as stubborn," said Rivers. "It's almost like in grade school when a girl and a guy; you know they love each other but they just keep flirting. But they don't want to talk. Well, we gotta get these two dudes to talk so they can get over it and fall back in love."

While there's still plenty of time to reach the goal of Allen and Garnett to get back on speaking terms again, Rivers still remains confident that getting his former All-Star shooting guard to attend KG's jersey retirement would be the ultimate reward.


Listen to Doc Rivers' full interview with Maxwell below: