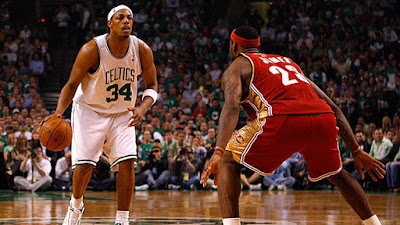 Paul Pierce has spoken and once again the Celtics legend is trending on social media over another controversial debate.


Pierce's argument is based on the fact that James has never been a part of building or maintaining a foundation of any franchise he's played for, citing names in his Top-5, along with others such as Larry Bird and Tim Duncan.


"Bill Russell built up the organization in Boston. He should get way more credit than we give him, and a lot of times he gets left out of the conversation," Pierce said. "So in saying that, Kareem (Abdul-Jabbar), Magic (Johnson), (Michael) Jordan, Tim Duncan, Kobe (Bryant), (Larry) Bird. These guys are all-time top 10 players who either helped build up their organization or continued the tradition."

While most disagreed with Pierce's view, the 10-time All-Star maintains that his former rival loaded up his championship teams rather than build them up.


"(James) went and put together that team in Miami," Pierce said. "And came back to Cleveland to put that team together. And then he went to the Lakers where tradition is already been made. That's to be continued. Saying that that's my argument."

Former Celtics teammate Kendrick Perkins offered some insight and context on why Pierce may feel a certain way about James and apparently it goes beyond basketball.


"Here is the thing, Paul Pierce's list is personal," Perkins explained on Wednesday night. "We don't talk about this, but Paul and LeBron have never liked each other since LeBron's rookie year."

Perkins spoke about an incident during an exhibition game before James' second season in the league, when Pierce was jawing and even spat toward the Cavaliers' bench.


"It was a clear spit," Perkins said. "Ever since that moment LeBron James and Paul Pierce hate each other. They don't speak to each other."

Either way, does Pierce have a case when it comes to James not being in that same elite class as those he mentioned?

Perkins doesn't think so, as he emphatically states "there is no way in hell you can't have LeBron in your Top 5" when reading Pierce's list.


Watch Jalen Rose and Jay Williams weigh in on Pierce's argument below: