Report: Teams asking NBA if they can travel directly to remote sites 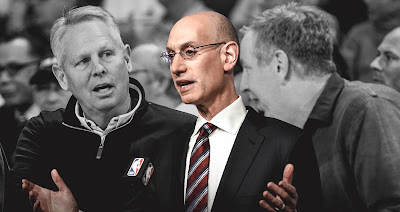 While the NBA season is reportedly in process of resuming within the next two months, teams are asking to report directly to the proposed remote location.

Sources tell ESPN, teams want to bypass players returning to their home markets who have left during the shutdown. The season has been suspended since March 11, due to the COVID-19 pandemic and teams want to avoid having to quarantine for any period of time -- some states as long as 14 days -- before having to travel for training camp.

The NBA has a board of governors call scheduled with Adam Silver next Friday for details of a plan and timetable regarding the season restarting. Teams are expected to be told to recall players to their home markets as early as June 1.

According to Adrian Wojnarowski, team executives from Boston, Brooklyn, New York and Toronto were some of the many who were concerned with a possible timetable being released that would not adhere to those restrictions of their marketplaces.

For example Raptors All-Star guard Kyle Lowry has been in Philadelphia working out and he wants to avoid having to return to Toronto and quarantining -- while not being able to use the team's practice facilities at all before traveling again to the league's remote campus (most likely Disney World) for training camp. Lowry, just as many others, don't want to delay the preparation process.

There are 21 of the league's 30 teams that have reopened their practice facilities for voluntary workouts, as the commissioner has yet to make an official decision on if the season will continue.

The league is still uncertain if teams at the bottom of the standings in both conferences should just remain home and if 20 or so teams play the rest of the regular season or just jump straight to the playoffs.

The NBA is expected to discuss the possible steps to resume the season within the next week, which includes plans of a two-week recall of players to their team marketplaces, 1-2 weeks of individual workouts at practice facilities and three weeks of training camp.

If all works out as what has been proposed the season could return by mid-June, with games being played beginning in mid-July, league sources said.