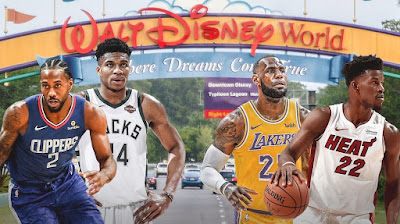 After a two and a half month suspension, the NBA has taking the first step to potentially resume its season by entering talks with Disney World in Orlando -- as a remote location to play games.

According to NBA spokesperson Mike Bass, the league is having conversations about finishing the season at Disney's ESPN World Wide Sports Complex in late July.


"The NBA, in conjunction with the National Basketball Players Association, is engaged in exploratory conversations with The Walt Disney Company about restarting the 2019-20 NBA season in late July at Disney's ESPN Wide World of Sports Complex in Florida as a single site for an NBA campus for games, practices and housing," Bass said. "Our priority continues to be the health and safety of all involved, and we are working with public health experts and government officials on a comprehensive set of guidelines to ensure that appropriate medical protocols and protections are in place."

It is not clear if the NBA, who has been on hiatus since March 11 due to COVID-19 pandemic, will play the remainder of the regular season or jump directly to the playoffs. But the three arena Disney complex and hotel would accommodate the league to restart and with very little exposure to the outside world.

ESPN's Adrian Wojnarowski, reported that Adam Silver and the league's board of governors plan to detail a timeline within the next week to resume the season. Teams will be expected to recall players to home markets as early as June 1.

If the NBA restarts in mid to late-July and run through about mid-September and a champion is crowned -- it gives the league a few months of an offseason for the draft and free agency before the 2020-21 campaign would tip-off in December (most likely around Christmas).