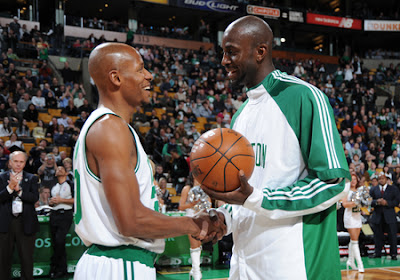 The ball's in Kevin Garnett's court.

For the Celtics fans that are hoping to see a Big 3 reunion at Garnett's jersey retirement ceremony, according to Ray Allen, who joined The Cedric Maxwell Podcast on Tuesday, the reunion is one let's-bury-the-hatchet conversation away from happening.

Allen, who opened up to Maxwell about why he left Boston, joined the then-rival Heat and hasn't been on good terms with Garnett ever since, didn't rule out the possibility of making an appearance at TD Garden for the much-anticipated event.


"As far as me being there," Allen said. "I think that is a subject that is really undecided yet. It would take Kevin (Garnett) and I to have a conversation moving forward. As you know when I left, I left as a free agent. I left because there were so many unresolved issues that the team wasn't considering or willing to change. As a free agent, you want to know that the team is going to do things you know they need to do." [CLNS Media]

In 2012, heading into the regular season, Garnett told media members, months removed from Allen's departure, that he no longer considered Allen a friend. Allen went on to win a championship with the Heat in 2013, still, nearly eight years removed from that decision, the tension stands between Allen and not only Garnett, but his other former Celtics teammates.

In 2017, when members of the 2008 Celtics championship team reunited with Garnett on his Area 21 show on TNT, guys like Paul Pierce, Kendrick Perkins, Rajon Rondo and others, shared their plans of going away on vacation in 2018 to commemorate the 10 year anniversary of their NBA title, they revealed that the majority members of the team voted to not extend an invite to Allen. Garnett also explained his distaste for the manner in which he left, according to the soon-to-be hall-of-famer, Allen never informed his teammates of his decision to head to Miami -- a move that still leaves a sour taste.

Clearly, time hasn't healed an unforgiving wound left behind. And for Allen, he's faced some tough times because of it.


"What is it now, 2020? You're talking about nine years now and I've gotten so much hate, death threats, vitriol from Boston fans, obviously these guys kind of removed me from the 'Big 3' -- said so many negative things about me," Allen said. "And I haven't had one negative thing to say about any of them, you know? We can talk about things that we went through. We had tough times, we're brothers. We went through a lot.

However, if you ask Allen, who's maintained this stance from the beginning; he holds no angst towrads Garnett.


"I never had any ill-will towards Kevin," Allen said. "This is not a two-way argument or debate. This is him. He dug his heels in the sand and he decided I'm not a brother of his anymore and so I said, 'cool.' I moved forward.

"I'm retired, I've moved on and I'm not going to go anywhere I'm not wanted and I do believe that sentiment has been relayed quite often on social media and so many different outlets."

Without the pressure from his teammates or the organization, it's tough to envision Garnett reaching out to Allen. We had a better chance of seeing Allen at Pierce's jersey retirement ceremony -- a recent opportunity to reunite the 'Big 3' that former head coach Doc Rivers blames himself for failing to execute. According to Allen, he never received an invite.

If Garnett hasn't reached out by this point, it's deemed unnecessary for him to ask Allen to join him for the moment his number will be going up into the rafters -- I'd save that bet for a night when the organization will eventually reunite the 2008 championship team. That special night is almost inevitable at this point, considering how close that team was despite all the drama that unfolded years removed from its title-winning season.

But seeing Garnett give up the feud and reach out to Allen for an event where he's the honoree, would be a shock. Chances are this feud will most likely stretch itself out a bit longer before reaching its end.


Click the video below to watch the entire interview between Allen and Max.