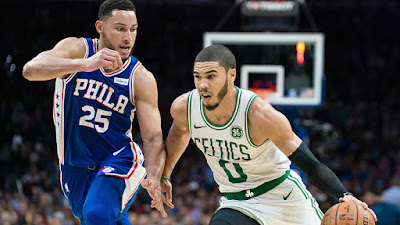 The NBA season is heading towards a potential return, which also means a new playoff format could follow.

The league is planing to restart the season in late July at Disney's ESPN World Wide Sports Complex in Orlando and according to insider Brian Windhorst, there is a "really good chance" the NBA doesn't play the remaining regular season games and just jumps to a 16-team playoff seeding, regardless of conference.


NBA switching things up for this year's playoffs? 🤔 pic.twitter.com/axSXPpMnqE
— theScore (@theScore) May 25, 2020


While the NBA is currently working on protocols to resume the season, it's still remains unclear if teams outside the playoff bubble will still have a shot to make the postseason or they'll just not travel to Disney World when training camp begins reportedly in mid-June.

Despite league commissioner Adam Silver and the board of governors still meeting on Friday, ESPN's Adrian Wojnarowski says don't expect an announcement of any detailed finalized summer basketball plans being made just yet.


While NBA’s Board of Governors meet with Adam Silver on Friday, there’s no current expectation for a decision on a finalized return-to-play plan to emerge from the session, sources tell ESPN. Talks on incorporating the three most serious plans remain ongoing with NBPA and teams.
— Adrian Wojnarowski (@wojespn) May 27, 2020


The only question that remains is if the NBA will finish the regular season or go right to the playoffs. Assuming the postseason bracket would be similar to that of the annual NCAA March Madness tournament, which is a plan that would need to be passed by league owners before going into effect.

Here's what the possible seeding would look like if the NBA agrees to go the 16-team format route and seven-game series, the fifth seeded Celtics will face the 76ers -- who would have the 12th best record in the league.


It's a "really good chance" the NBA goes straight into the playoffs, possibly with no conference, per @WindhorstESPN

What are your predictions if this does happen? pic.twitter.com/6XQp0X64Ea
— Sideline Sources (@sidelinesources) May 25, 2020