Jaylen Brown on if the NBA season will resume: 'A lot of guys want to play' 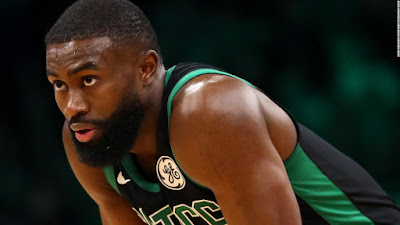 The NBA has given fans some optimism over the past 24 hours on if a decision will be made to resume the 2019-20 season.

According to ESPN's Adrian Wojnarowski, the league's board of governors and NBA commissioner Adam Silver had a productive phone call on Tuesday, as all of those involved felt "increasingly positive about the league's momentum towards a resumption of play this season."

Chris Haynes of Yahoo! Sports, also reported that a group of eight league superstars, that included LeBron James and NBPA president Chris Paul, had a "private conference call on Monday and established (a) united front in favor of resuming season."


On Wednesday, Celtics guard and one of the NBPA's vice presidents Jaylen Brown, spoke to CNN about the players' private call and the desire to finish the season.


"A lot of the guys want to play," Brown said. "I think the most influential players that were on that call that we speak of, a lot of those guys want to continue the season and that's very important to us. But we've also got to get with some of the other guys that also make up this league and see how they feel. Everything is moving in the (right direction). ... We (just) don't want to come back too early and make people feel like things are OK and things are not and (are) potentially dangerous."

A group of NBA stars, including @KingJames, @KDTrey5, and @CP3, held a secret call to discuss a possible reopening of the season.
"As the NBA and as a brand, you want to make sure that you're on par with the science and the research," @TheNBPA VP Jaylen Brown tells @brikeilarcnn. pic.twitter.com/R9x2KxVU8I
— CNN Newsroom (@CNNnewsroom) May 13, 2020


Plenty of decisions need to be made before the NBA season can return, which include where games will be played, since some states still will not allow sporting events anytime soon. Plus, if the season does resume, are they going to continue the regular season or go straight to the playoffs?

While most teams have already played around 65 of the 82 regular season games scheduled, the Celtics are currently have the third best record in the Eastern Conference at 43-21 and are not in danger of making the postseason. If the playoff were to begin today, Boston would face the sixth seed Philadelphia 76ers (39-26) in a first round match-up.

Despite both players and league officials wanting to resume the NBA season, the challenge that still remains is finding the safest solution for all parties.